In 1992 I wrote an article for The Strad magazine about the use of a vacuum bag in the process of fitting a reinforcing patch in a cello. In that example I cut a hole in the bag around the patch area and sealed the edges of the bag to the to the cello top. In this way I got access to the work area but maintaining a tight seal was a bit challenging. Subsequently I have found that in many instances it works better to seal the top and mold completely in the bag, fit the patch onto the plastic and then remove the bag just prior gluing the patch in place. This works best in where the patch profile has a shallow dish to it.

This patch on a viola top is a good candidate for using a vacuum bag. The patch area has been thinned out by a previous repairman and is quite flexible, it does not lie flat in the backing plaster mold. This makes it difficult to accurately chalk fit the repair wood into place. By placing the job inside a bag and sucking out the air, the viola top will be pulled down firmly into the mold giving a good surface to work on. (Note the “V” marks on the patch edge – explained below). 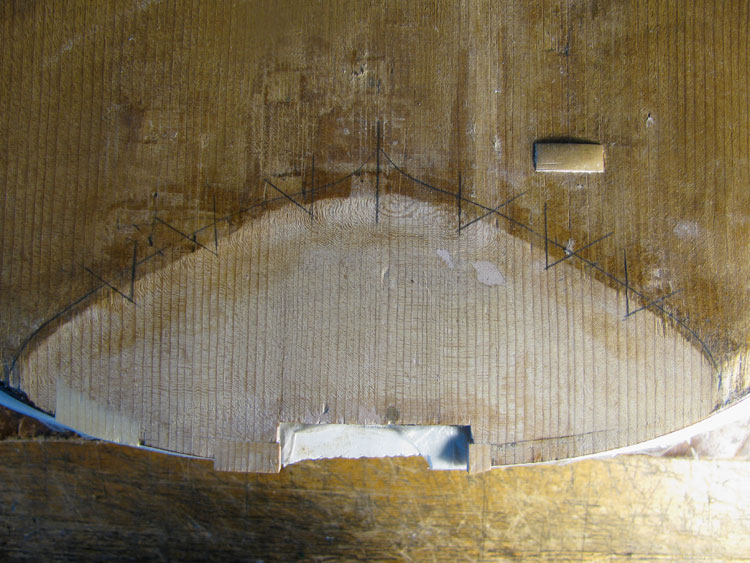 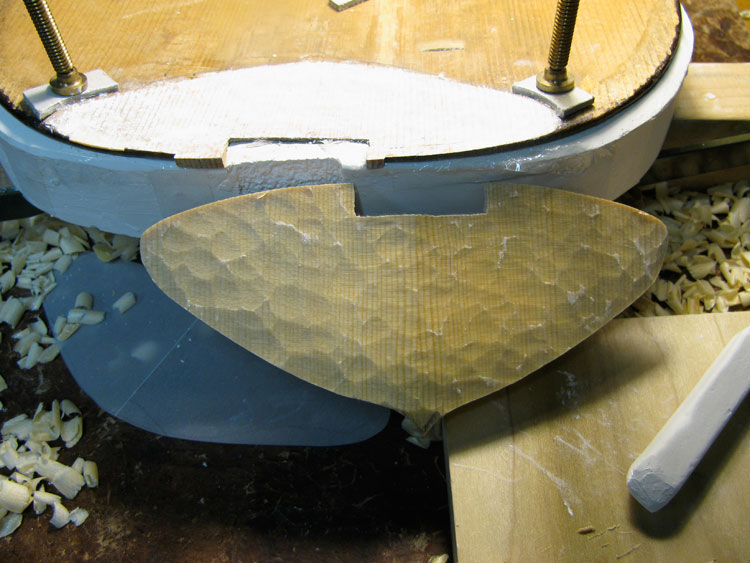 Rough fitting the patch. New patch wood has been placed into the patch area, the chalk shows where the patch is making contact, the chalked areas of the patch are cut off and the process is repeated. 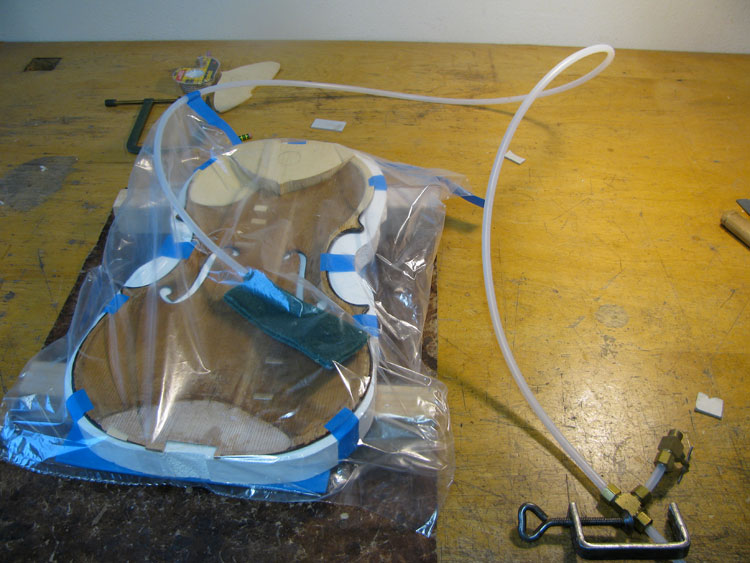 The viola top has been taped into place in the plaster mold and sealed into the vacuum bag. The bag I used is only 0.01mm thick, about the same as a supermarket vegetable bag. There is a valve in the line near the bag, this allows me to control the rate of evacuation and avoid wrinkles in the work area. 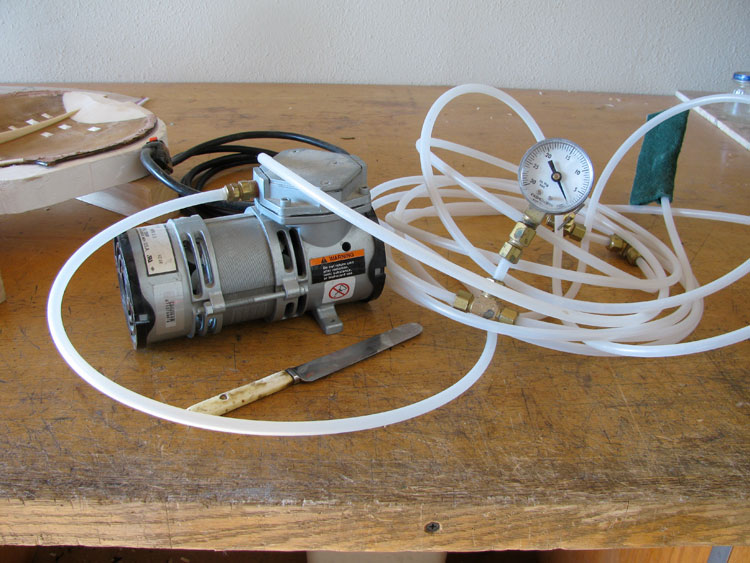 Here is the little vacuum pump. I have it on a long line so that it an be in the other room while I’m working. The green thing on the end of the line is a scouting pad to stop the line end getting sealed by the plastic bag 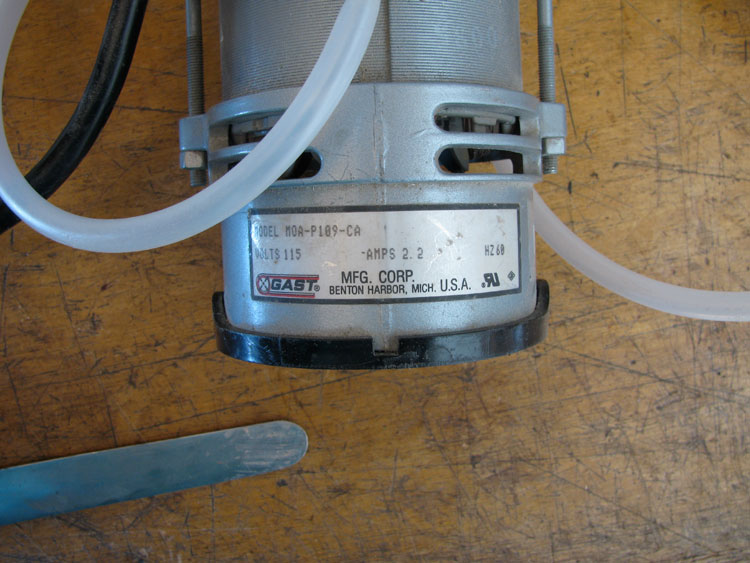 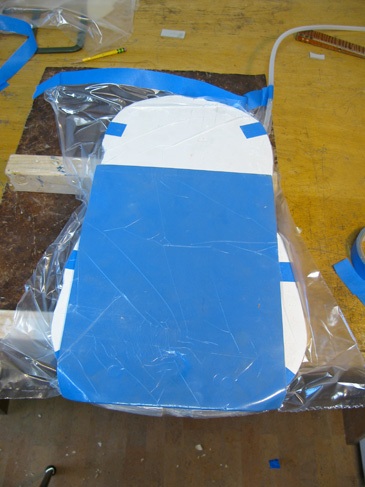 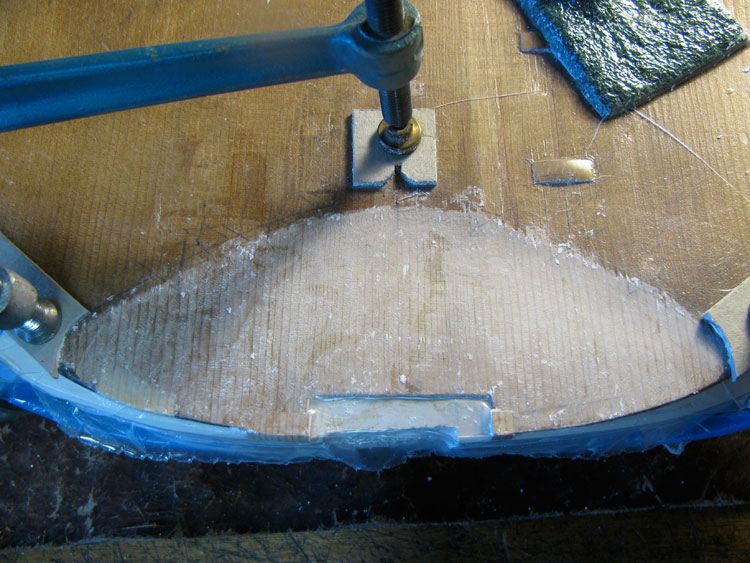 I use cardboard as locating tabs. Chalk applied to the bags surface sticks very well, there seems to be some kind of electrostatic attraction between the chalk and the plastic.

The new patch wood has been placed into the patch area, the chalk shows where the patch is making contact , the chalked areas of the patch are cut off and the process is repeated 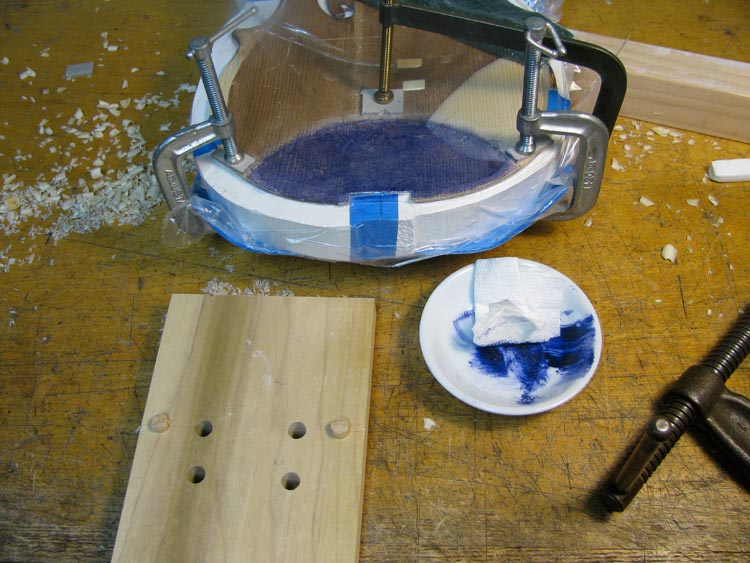 After rough fitting with chalk I switch to oil paint as a marker, this is essentially turning the plastic surface of the bag into carbon paper. I hesitated a long time before trying oil paint as a marker because I feared the the presence of oil on the wood surface could weaken the final glue joint between the patch and the viola top, but in the end I figured that all of the oil gets removed in the cutting process. I’ve found that Ultramarine works well, it has a smooth texture and a fierce tinting nature. 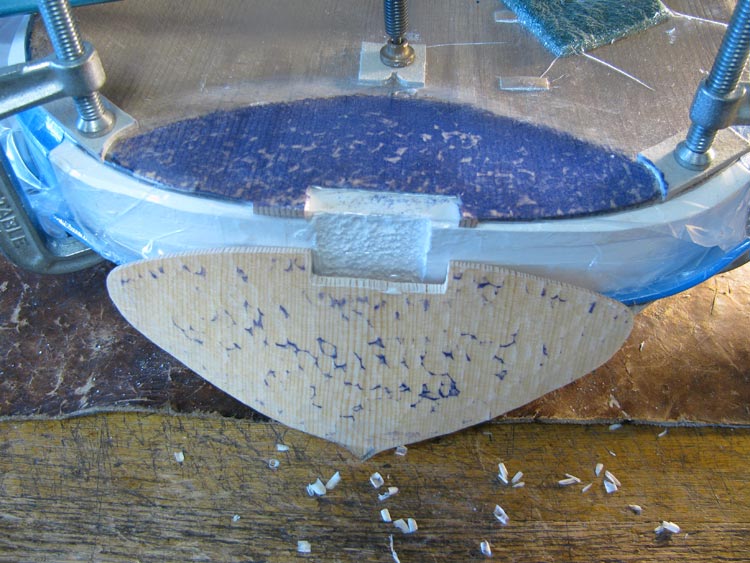 The oil paint is much easier to “read ” than chalk…… 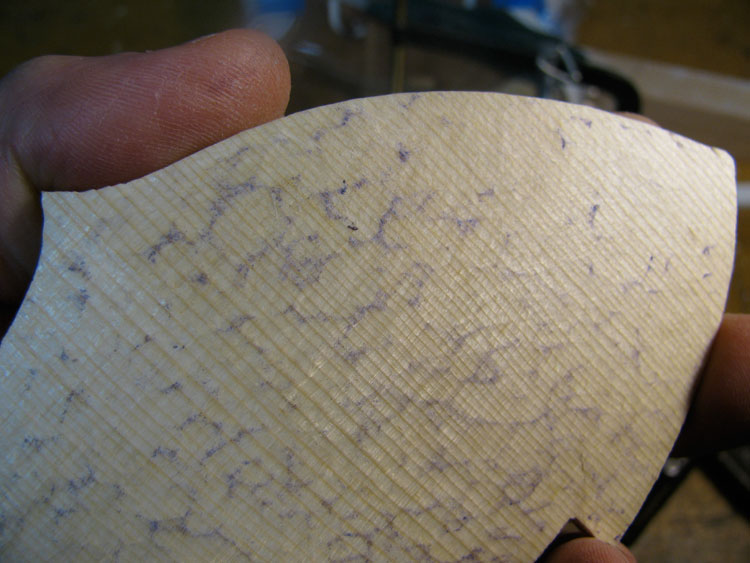 ….even in the later fitting stages…….. 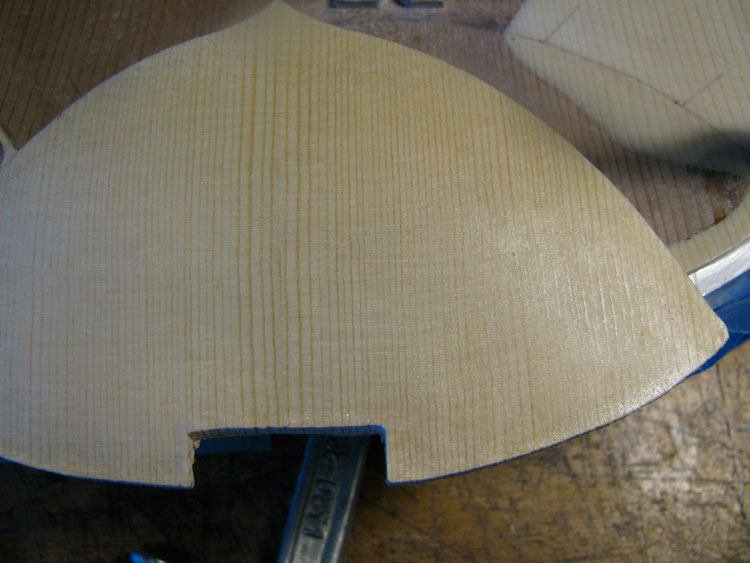 …….and it removes completely before gluing. 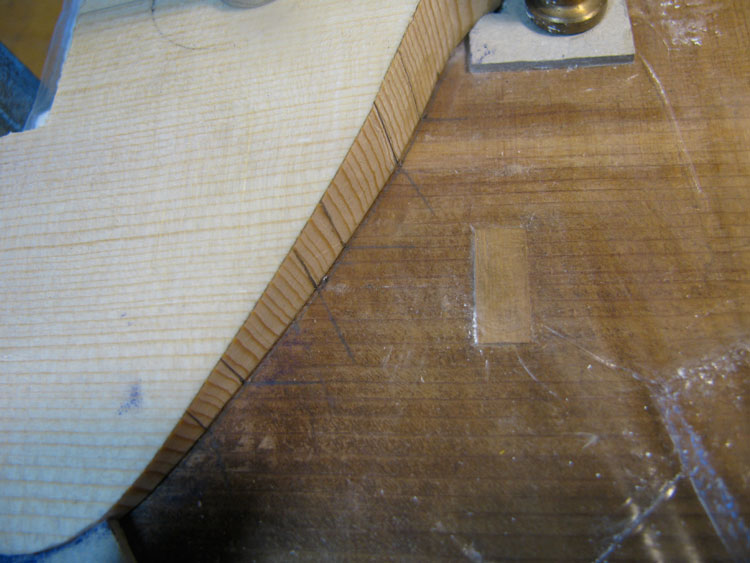 It is possible for the card locating tabs to creep during the fitting process so when a final fit has been achieved, just prior to removing the plastic bag, I mark on the patch edge the points at which it intersects with a series of diverging lines marked on the viola top (also see picture 1). In this way the exact location of the patch can be replicated for final gluing. 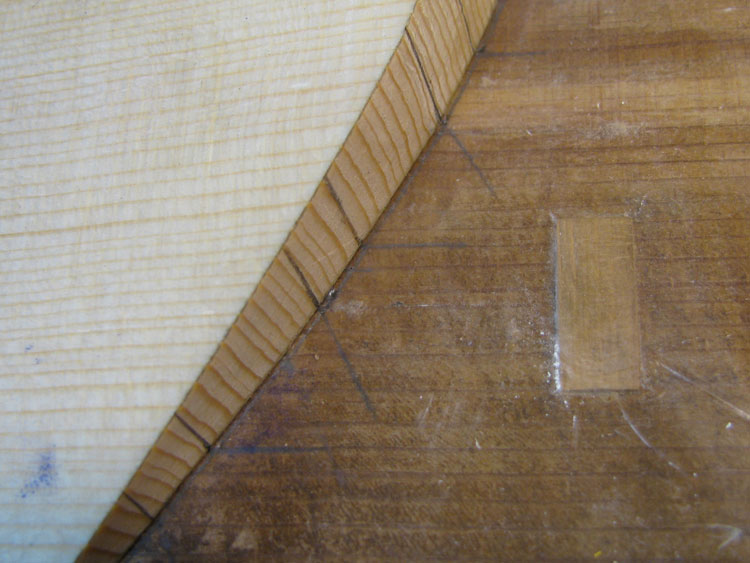 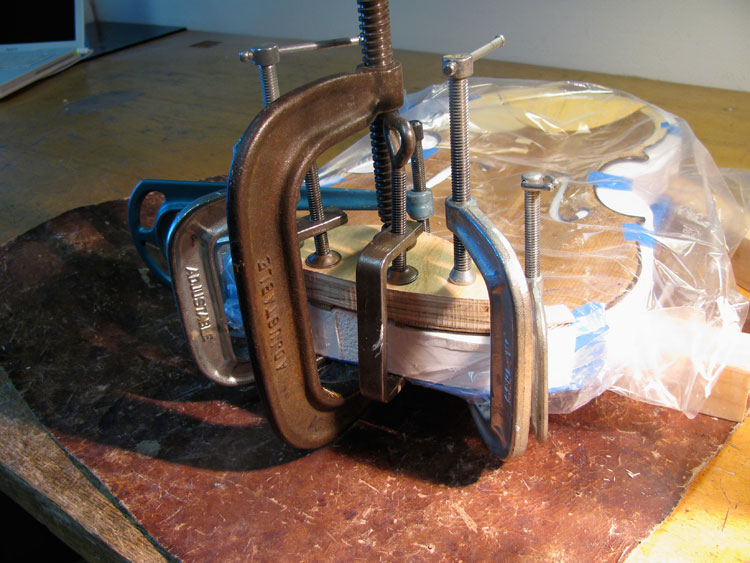 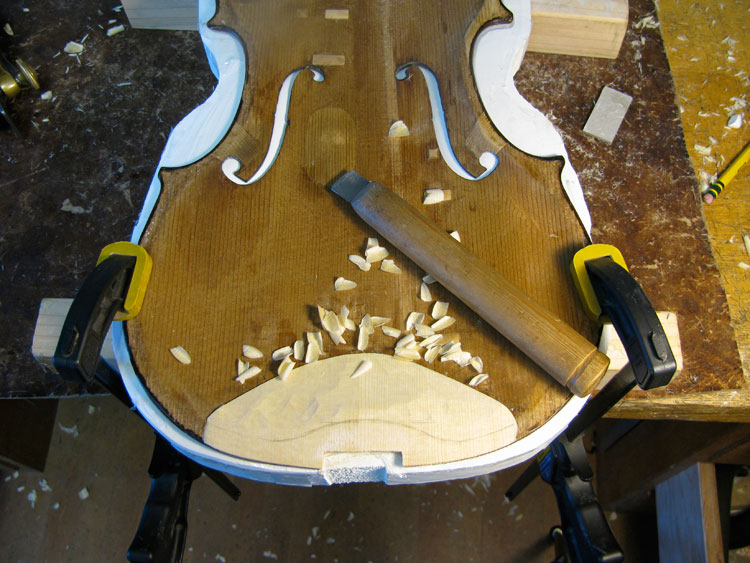 The new patch is trimmed to final dimensions. 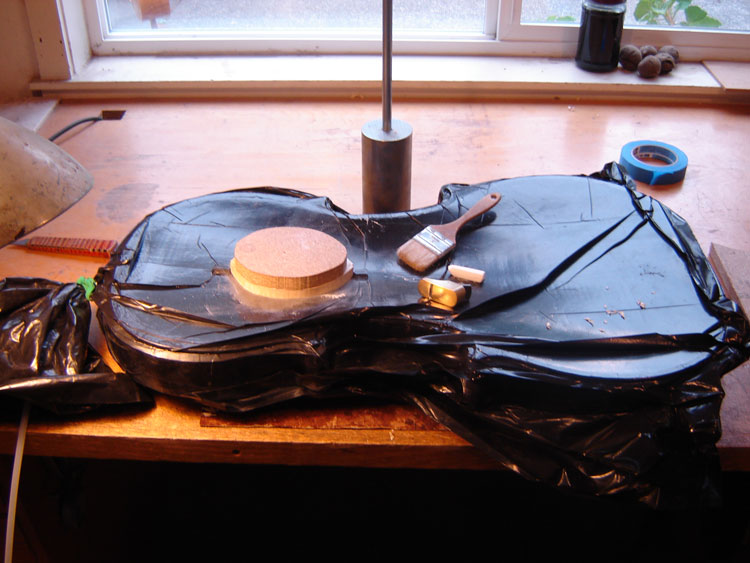 A cello top inside a contractors bag. 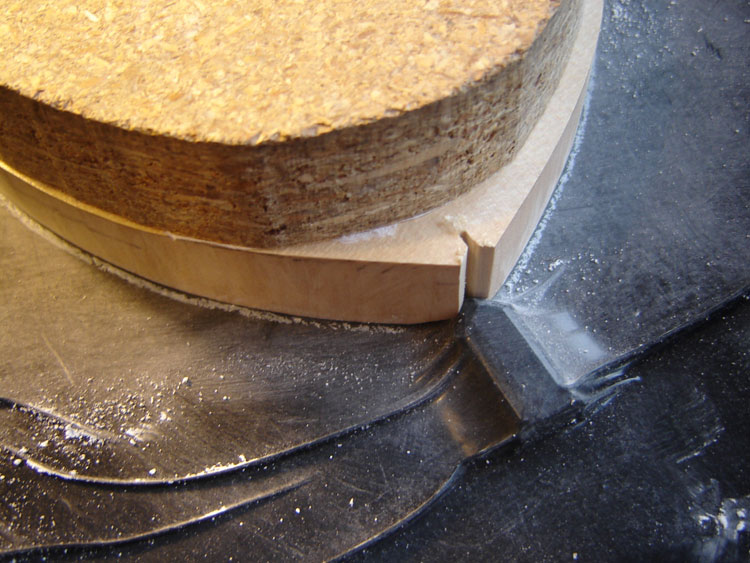 When using a thicker bag, which is less likely to puncture, I glue a temporary wooden locator to the cello surface inside the bag. 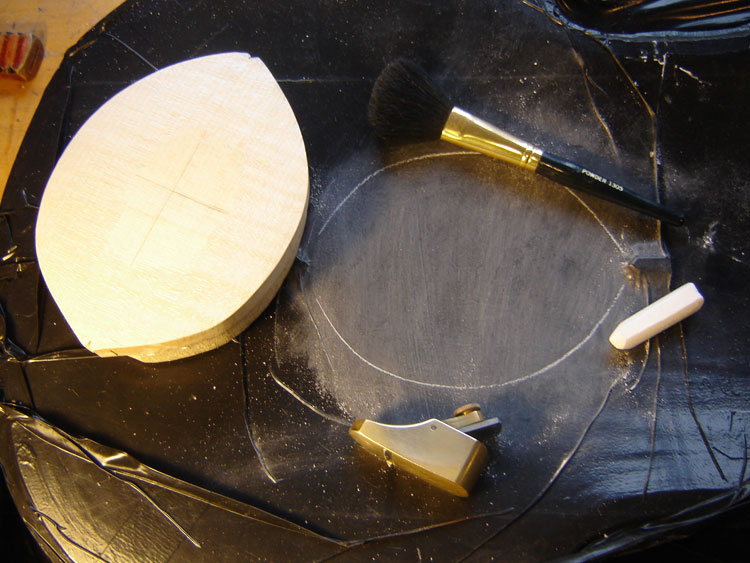 Showing how well the chalk adheres to the plastic. Oil paint could be used instead of chalk.