This is a follow up to the Dimpled Viola project and develops some of the ideas sparked by that project.  With the viola I made an instrument that made a feature of the gouge work that appears in early stages of carving an instrument but that normally gets completely removed as the forms are refined.  Some features of that viola, particularly the patterns on the ribs and scroll, reminded me of reptile skin  and I decided to to make another instrument that developed that similarity.

The viola featured a veil of similar sized, but more or less random shaped divots,  the Turtle violin takes those divots and enlarges and regularizes them to suggest the keratinous scales on a turtle or tortoise shell. On the violin the divots or cells are laid out in four rows to each half of the back and top plates. The rows get  narrower in the waist of the instrument but remain of approximately equal width.  There is an additional edging row around the margin of the plates.  Each row is then divided into cells which are arranged in a staggered “brick” pattern.  I also considered arranging them in a grid pattern, but looking at pictures of reptiles I noticed that those with a flexible armored skin, like alligators  and lizards have roughly grid shaped patterns in their skins.  Whereas in those with rigid protective shells, the bone plates are fused together in a brick or honey comb patterns which is presumably  stronger. 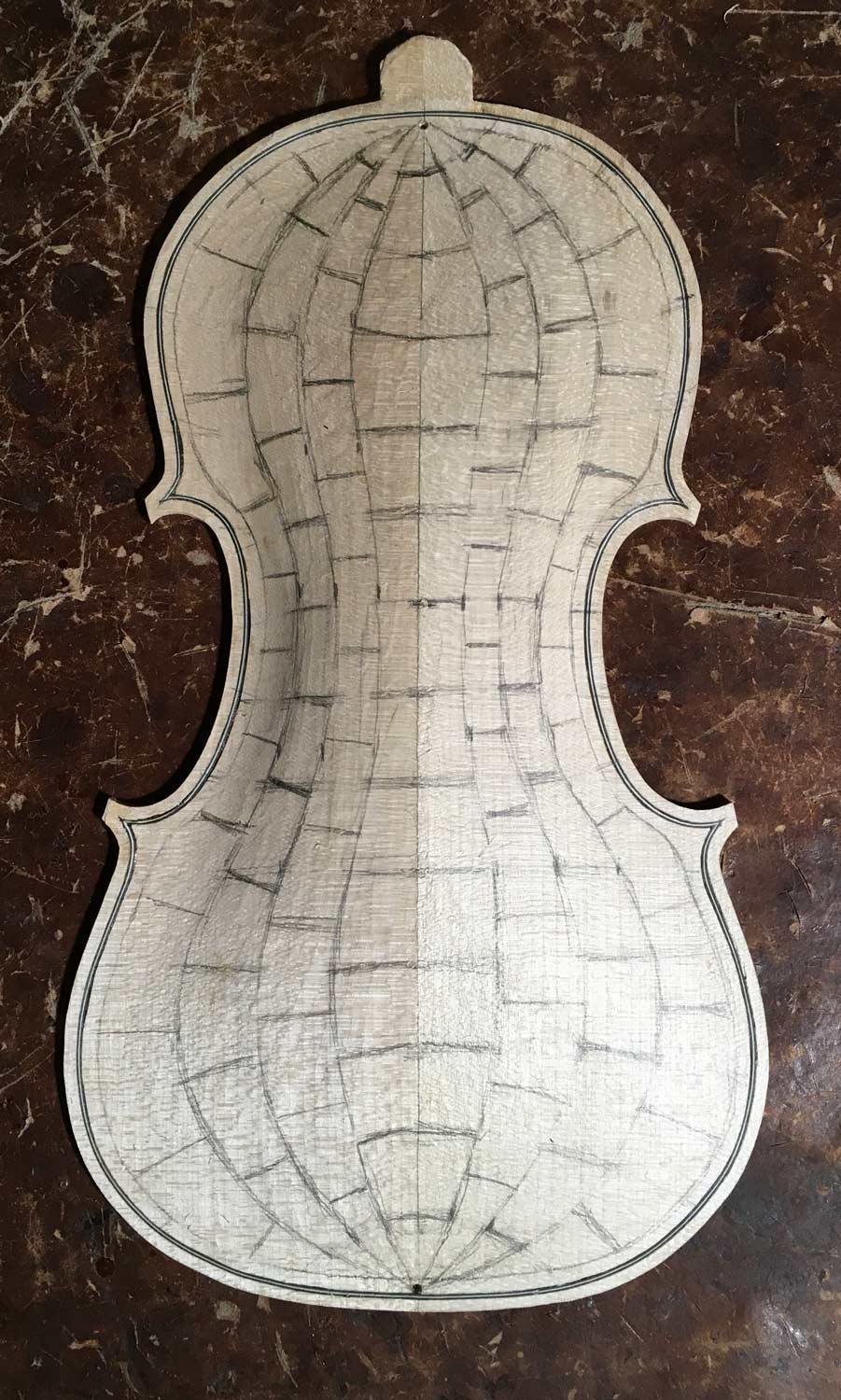 I then carved out the cell pattern using a wide, shallow gouge.  I soon realized that carving a brick or honeycomb cell pattern is way easier than carving a grid cell pattern, because in the grid pattern there are tight 90 degree corners that need cutting with a smaller radius gouge. In this fiddle there are some cells in a grid pattern along the center lines of the front and back plates, and also on the back of the scroll where the fluting would normally be.

Effect of cell patterns on graduations

In the Dimpled Viola each divot or cell was made with a single cut of the gouge, the cells had a rounded shape determined by the sweep of the gouge (fig. 1).  In the Turtle fiddle, with its larger cell pattern, that wasn’t possible (fig. 2),  so the cells on the Turtle Fiddle were  made more or less flat-bottomed allowing graduating with a simple internal profile (fig. 3).  If the cells had been cut as if with a single sweep of the gouge, this would have made much deeper, rounded cuts into the plates and it would have required very elaborate work when graduating the plate for thickness. The plate would have ended up with  small mounds on the inside (fig 4). The effect would be quite dramatic but much harder to achieve. Perhaps that will be  an advanced-level project for later, but in this case I kept the cells shallow and the inside of this finished violin looks like a normal instrument. 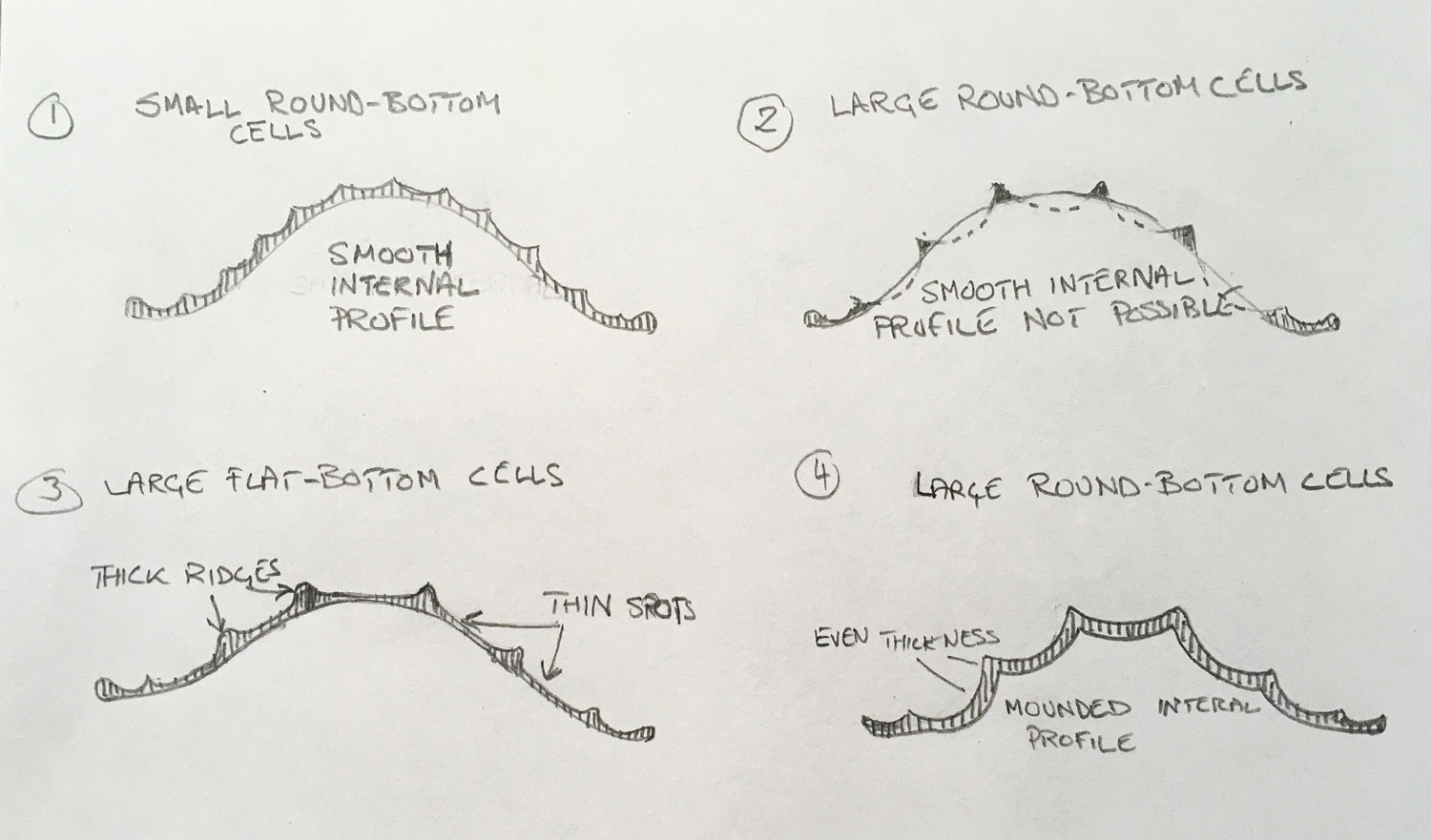 Cross sections of a violin plate showing the effects of different dimple patterns. 1- As used in the Dimpled viola. 2-The impossibility of enlarging the round bottomed cell pattern without changing the internal profile. 3- the cell profile used on the Turtle Fiddle. 4- A (just about) possible profile using large round bottomed cells.

To create the “flat- bottomed” cells, each cell has many sub cuts, which I left quite visible, hoping that they might show up in an interesting way in the finished instrument.  This proved to be the case as you’ll see below. 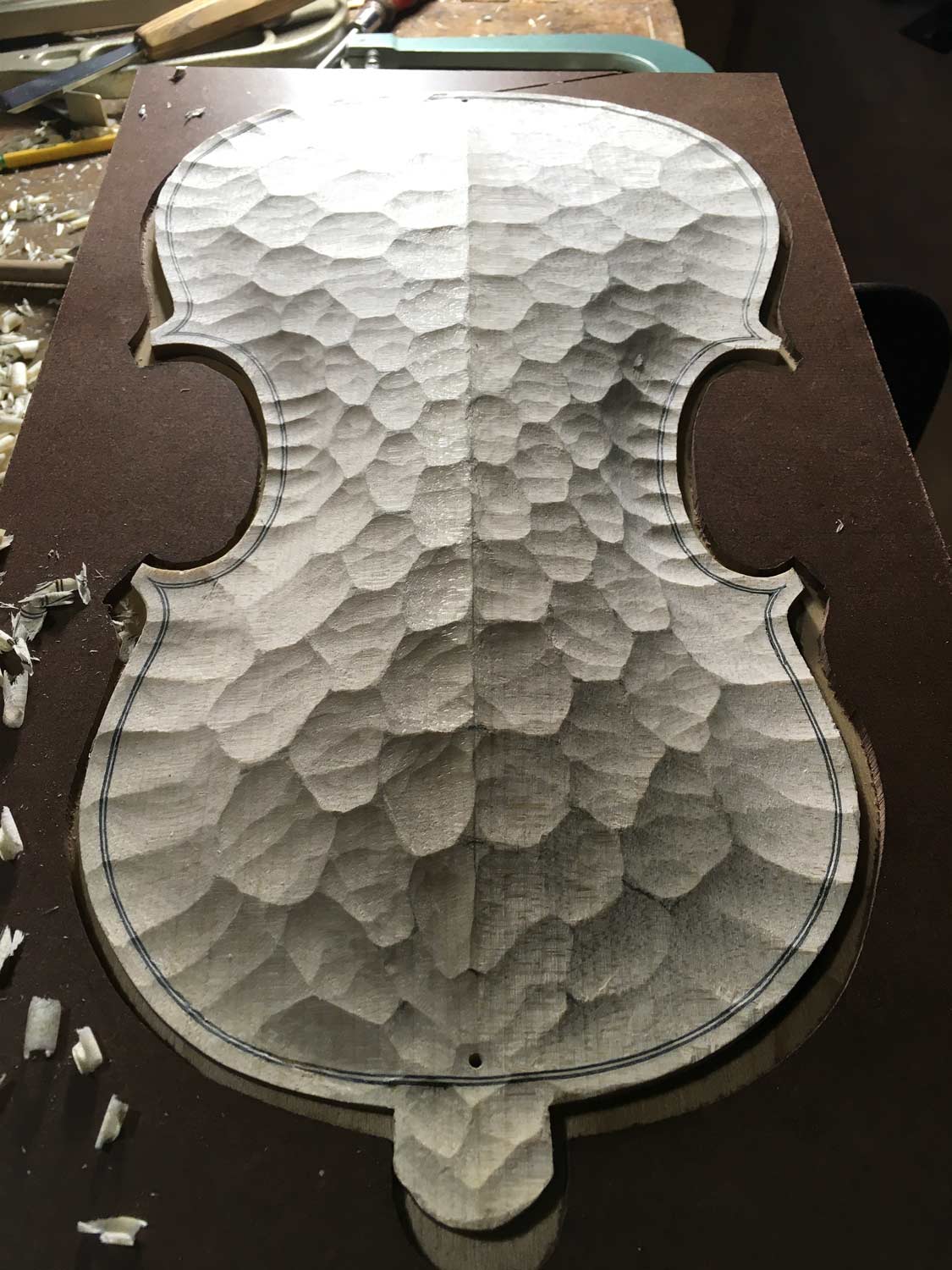 The plate was graduated and the finished thicknesses were slightly more than usual on the ridges between cells and slightly less than usual in the centers of the cells.  I used normal guides in terms of tap tones and plate weights. 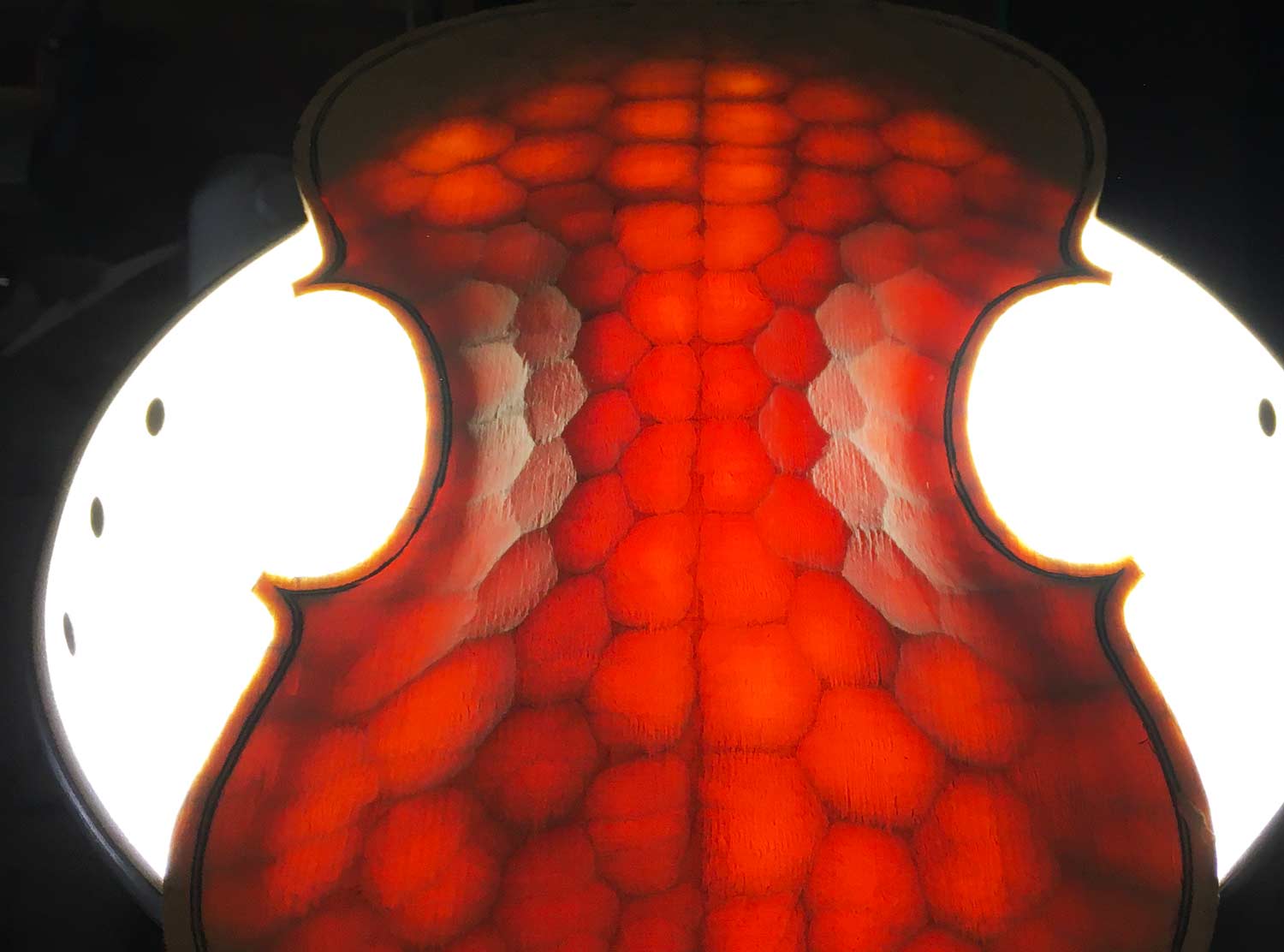 The power of suggestion

I could have made the cell pattern resemble the turtle a lot more but I’m more interested in suggestions rather than replications because they have a more stimulating effect on the viewer.  If you suggest something the viewer builds their own picture with their imagination and that maybe spins them off in new directions. If you attempt to copy something, the audience is likely to put their energy into judging how accurate your rendering is and that is the end of the process. 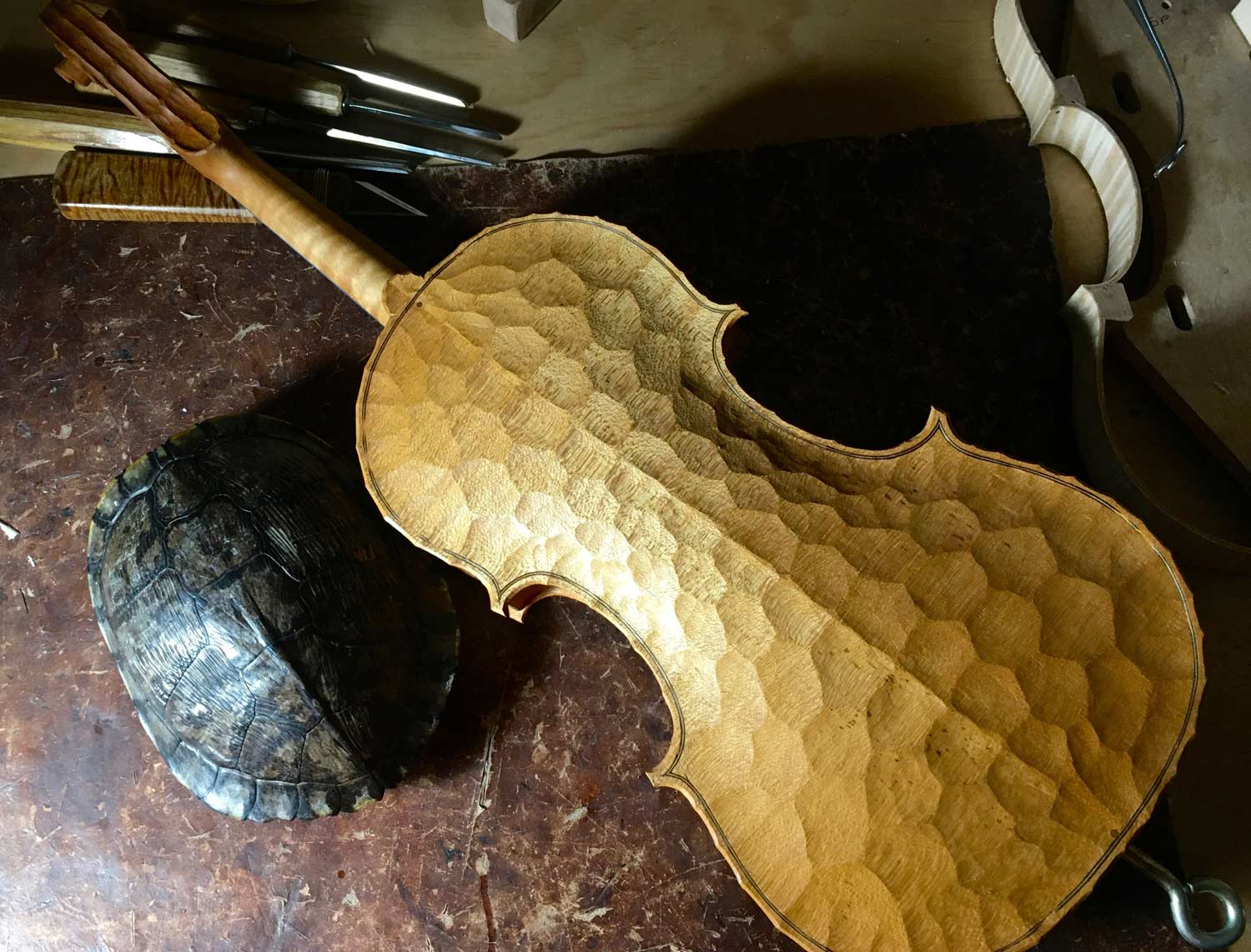 I started with a thick coat of orange varnish followed by a heavy patina which I then wore back and cleaned off, creating  what I hoped would be an organic appearance. 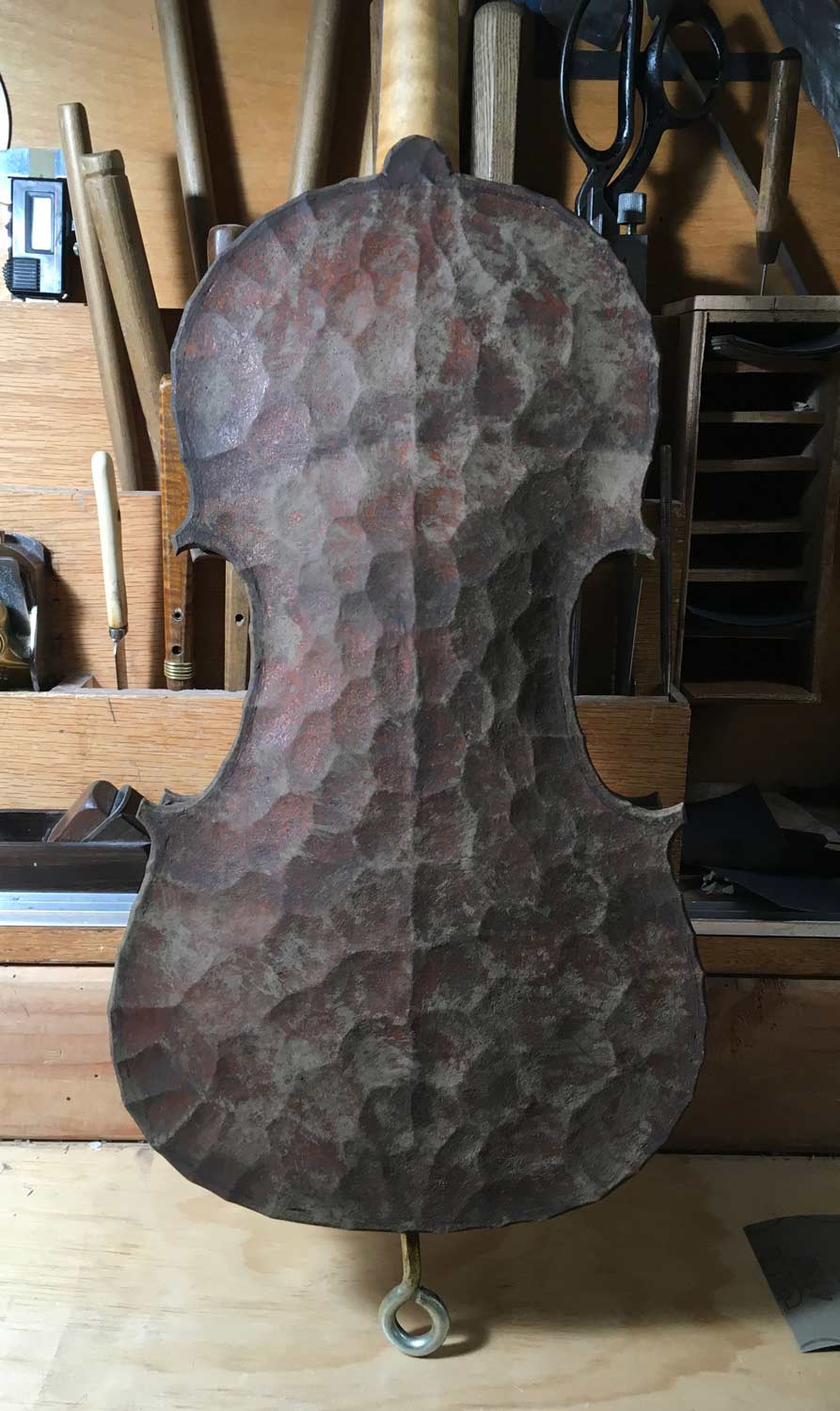 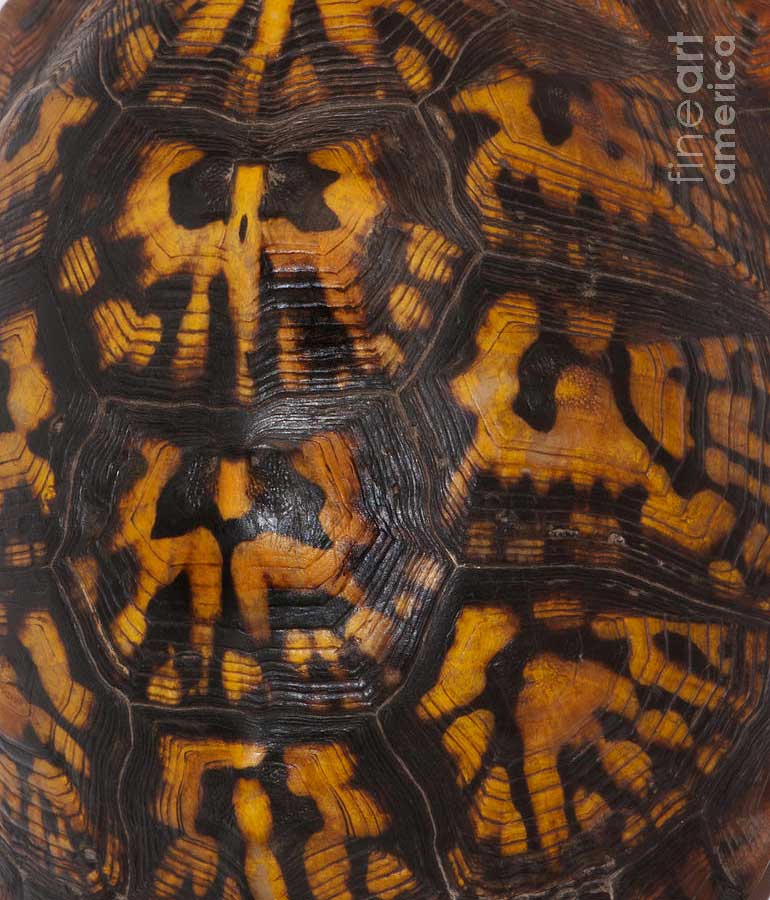 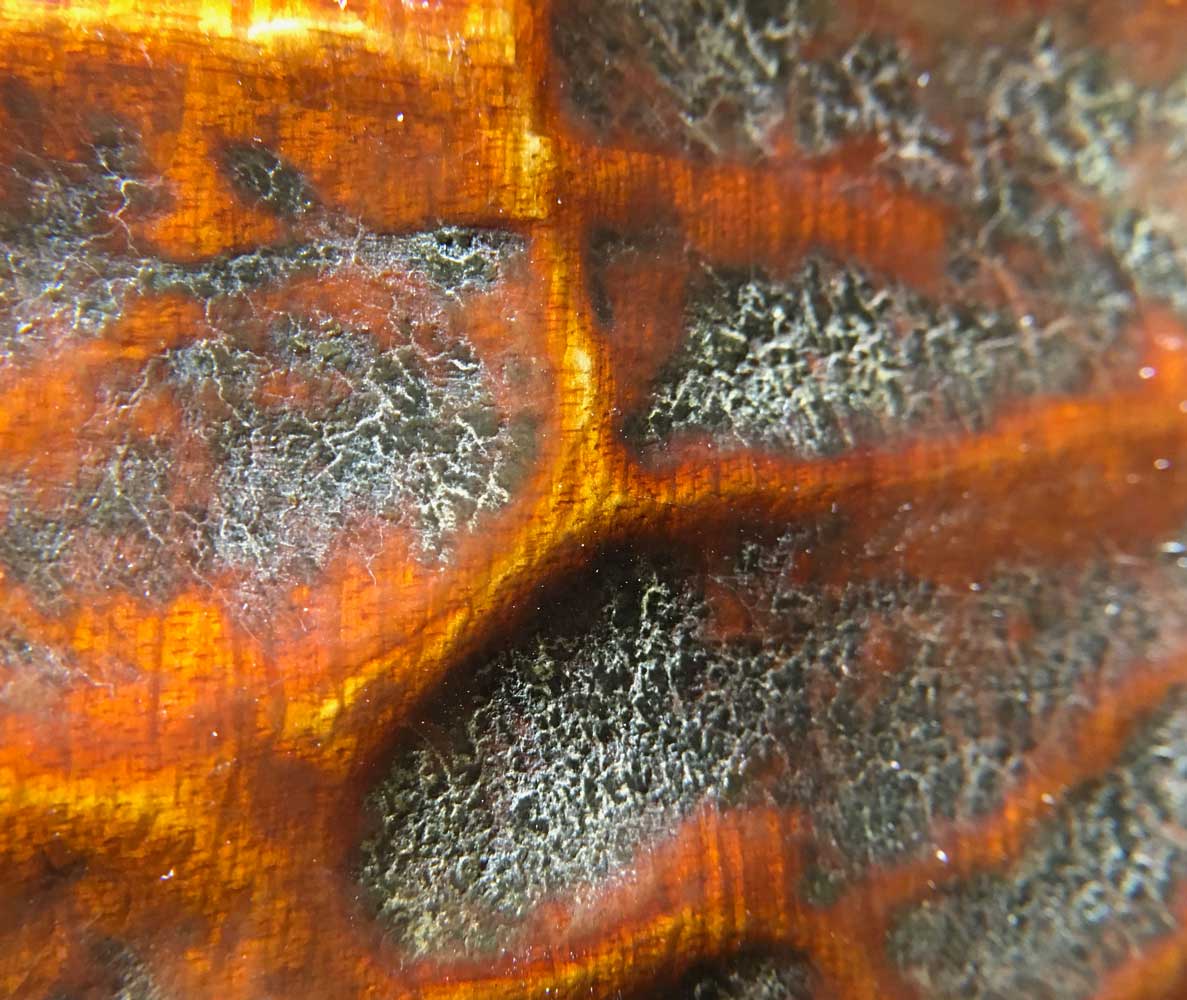 Visually the cellular pattern, along with the the sub-pattern of smaller gouge marks, creates a layered effect. In some areas it appears that,  like traveling to inner or outer space, you could enter the structure and keep finding similar repeated structures the deeper you go. 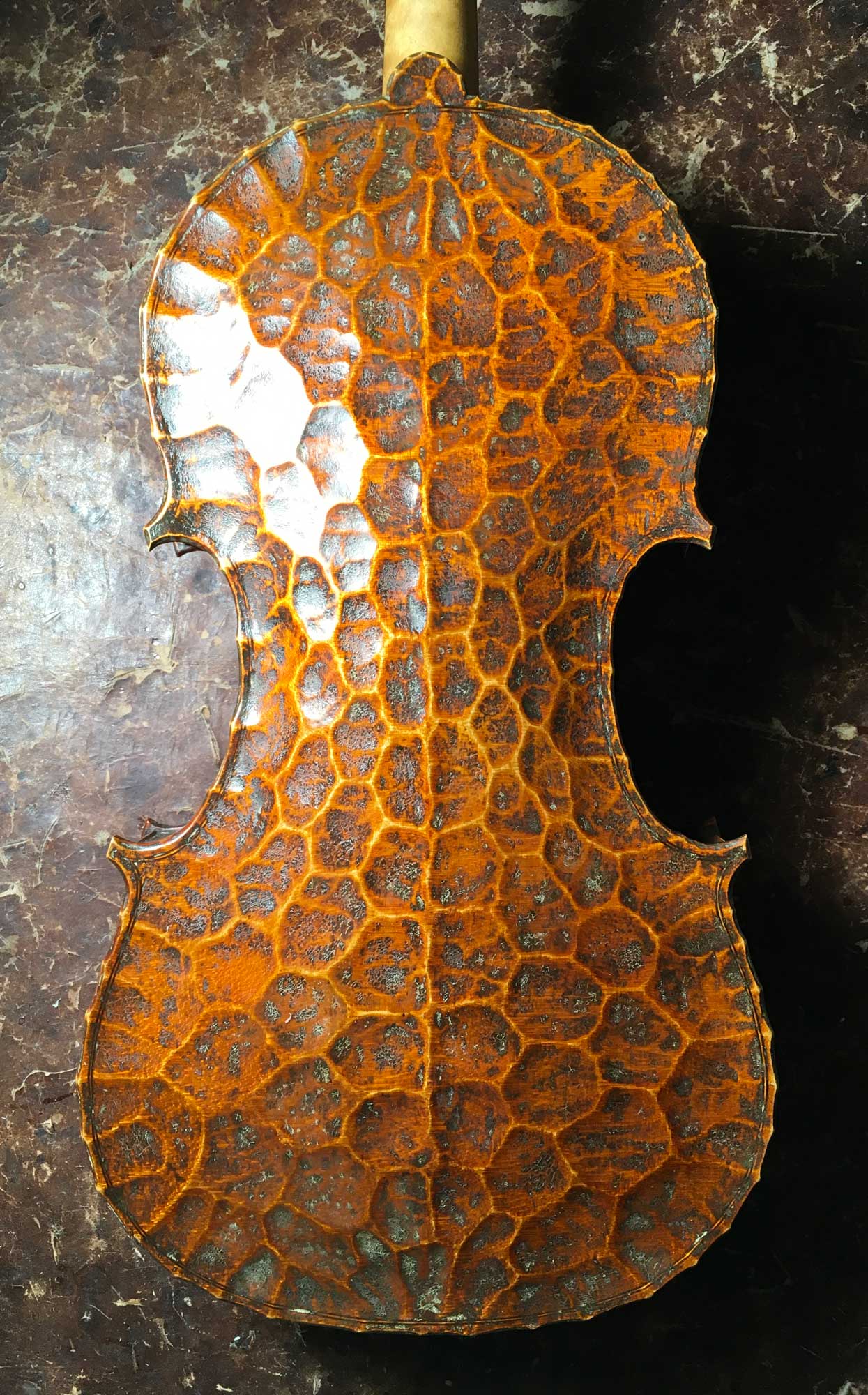 This is an effect that you often find in nature, and can be reproduced with mathematical models 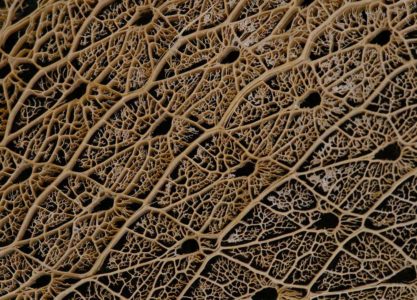 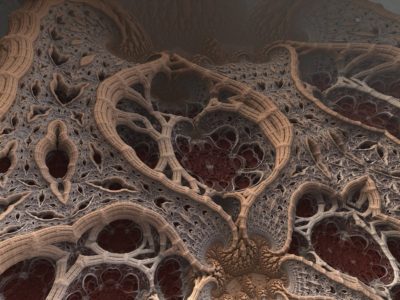 3D Fractals. You can enter the structure where the patterns repeat and vary endlessly. Pixy.org 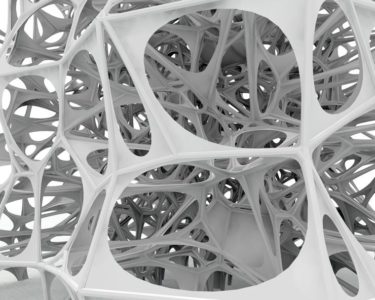 Other ways of seeing

Like to spend a trippy half hour? Try Googling “Gecko Eyes”.  Many of them have otherworldly slit pupils 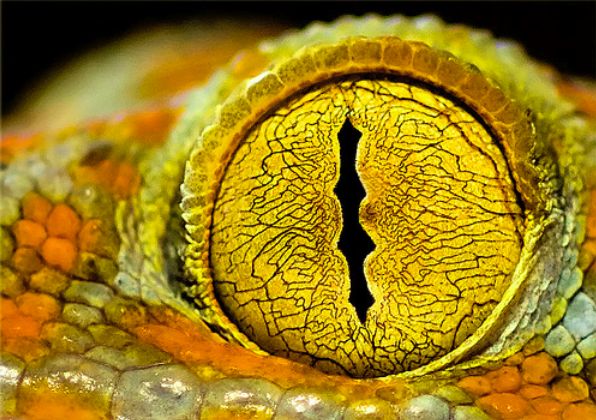 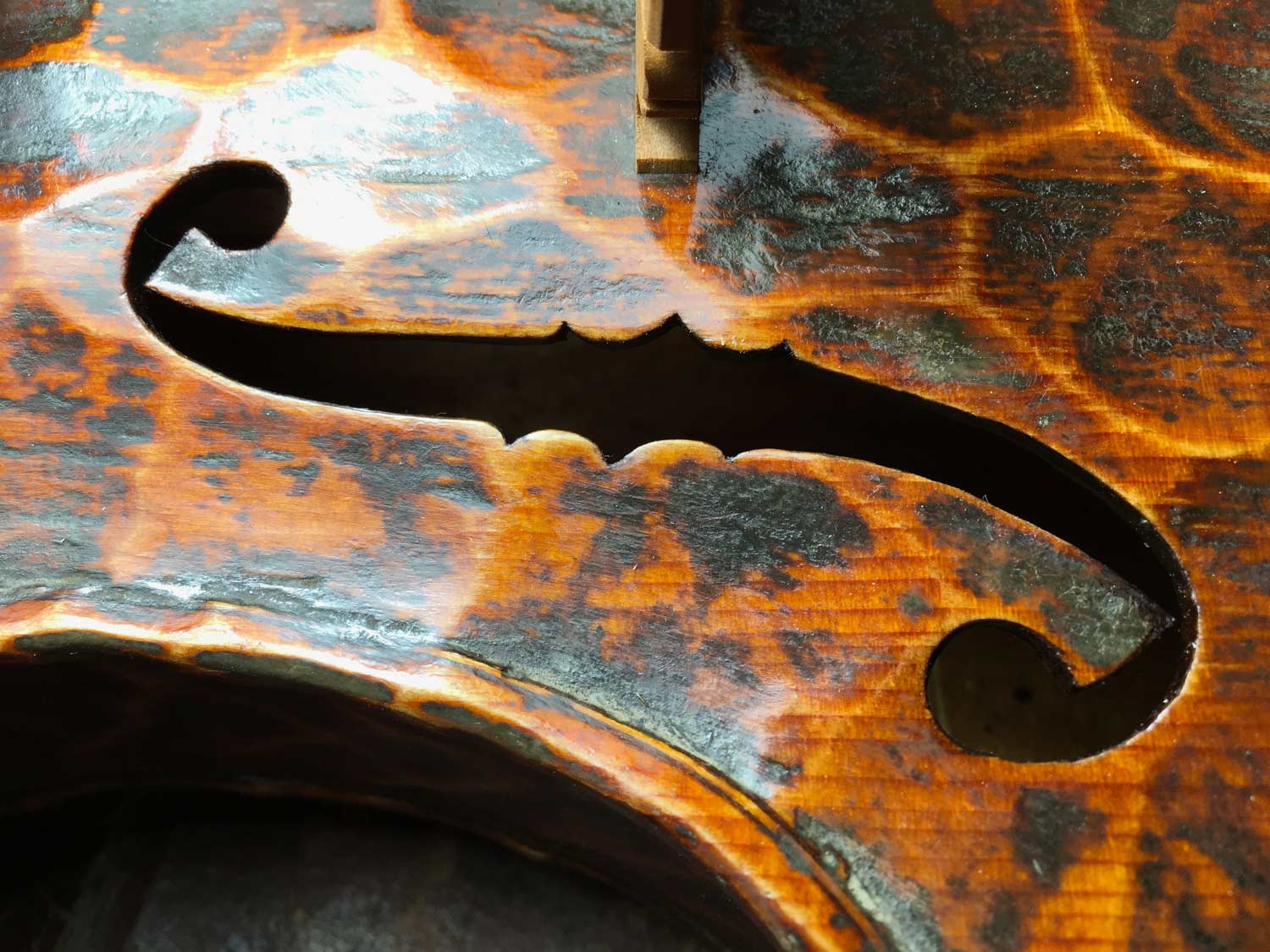 This cellular pattern theme seems to be an incredibly rich vein to explore as cellular structures of repeated units underpin Life, as well as many inorganic forms in this world.  Look at this Pintrest collection for just a few examples of this in the Natural World. There are many mathematical models, such as Fibonacci Sequences, Voronoi tessellations and Fractals  which describe such patterns. Cellular structures have been a rich source of inspiration in the arts from Islamic tiles to modern engineered structures, see for example  the work of the the design group Matsys.

The two instruments that I’ve made so far are different from normal instruments only in visual or decorative ways. However I can see that If I start pushing these cellular designs to extremes it will very soon start having consequences for the tonal aspects of the instruments.  At this point I have no idea what those consequences might be but the easiest way find out is to build a couple of examples and see what happens.  That is exactly what I intend to do.  The probability is that they will sound “worse” that normal violins but I’m sure that that building them will shed some light on how regular violins work and it might give some insight into how to push and shape violin tone.  Whatever the outcome I’m sure it will be an interesting trip.

See more photos, plus dimensions of the Turtle Fiddle 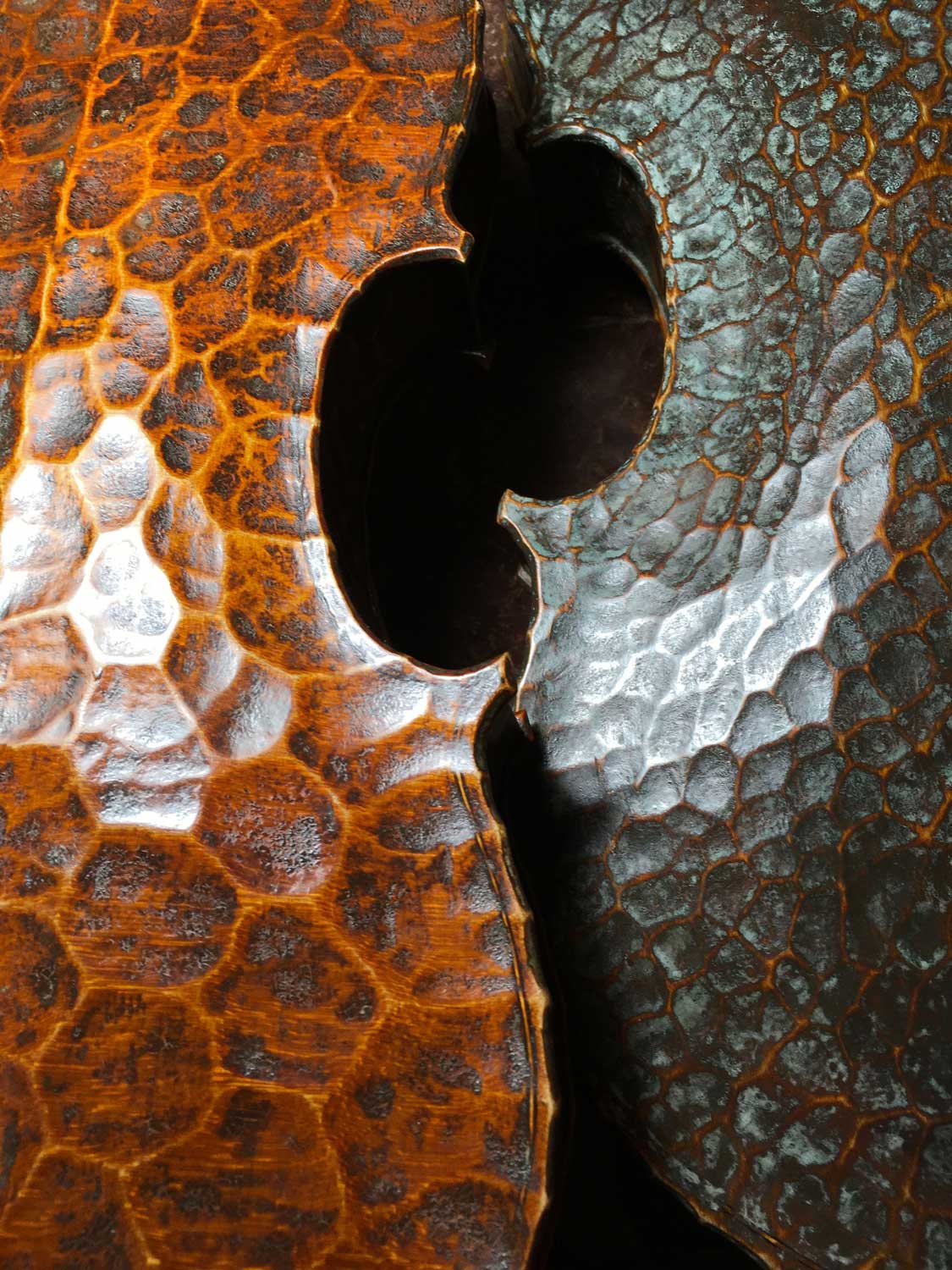