A study of violin aesthetics

This is another project that approaches violin making from a slightly different angle in hope of gaining a deeper understanding of the craft.  This study is concerned with the visual rather than the functional side of violinmaking, though of course form, function and aesthetic appearance are all strongly connected. In particular I was interested here in the decorative aspects of the violin. In the course of making this instrument, I came to understand that some of the “rules” of composition and aesthetics are shared in many, if not all, art forms. In attempting to make a visually attractive object I found myself engaging compositional devices such as Theme and Variation, Call and Response, Rhythm and Disruption, Order and Randomness, that will be familiar to musicians, poets, painters and sculptors and to those who enjoy their work.

Also in the course of this study, I found that the topic became so large that I had trouble corralling all of the ideas it has evoked for me, so I’ve decided to present it as a simple account of what I did, and allow myself to digress when inspired to do so. This first post is about about the construction of the viola and is more concerned with form, composition and structure.  The second post will be about finishing the instrument and will be more concerned with surfaces, color and texture.

In any exploration, it is good to have a goal to get you  back on track after exploring the rabbit holes rabbit holes that you encounter along the way.  For this expedition, I decided to make an instrument that:

In a way this study is a continuation of the Shoki’s Violin Scroll project where I asked whether we couldn’t use something other than old violins as the source of inspiration for our new ones? I was nervous presenting that idea, but I was happy to get a very encouraging reception. I now realize that this shouldn’t have surprised me too much as musicians, though great lovers of tradition, routinely engage with contemporary music that is often a lot more shocking in its own way,  than my exaggerating a few tool marks on a scroll.

In order to help achieve the four goals named above, particularly the points about making and something that is engaging and that has an organic feel, I followed many of the working principles that I normally use when making a violin. I added a few others, conceived specifically for this project.

Starting with the ribs, I planed one side flat and clamped them to the bench. I worked with a gouge, first finishing all of one side and then the other. I found that working on a diagonal was the surest way to make a clean cut, 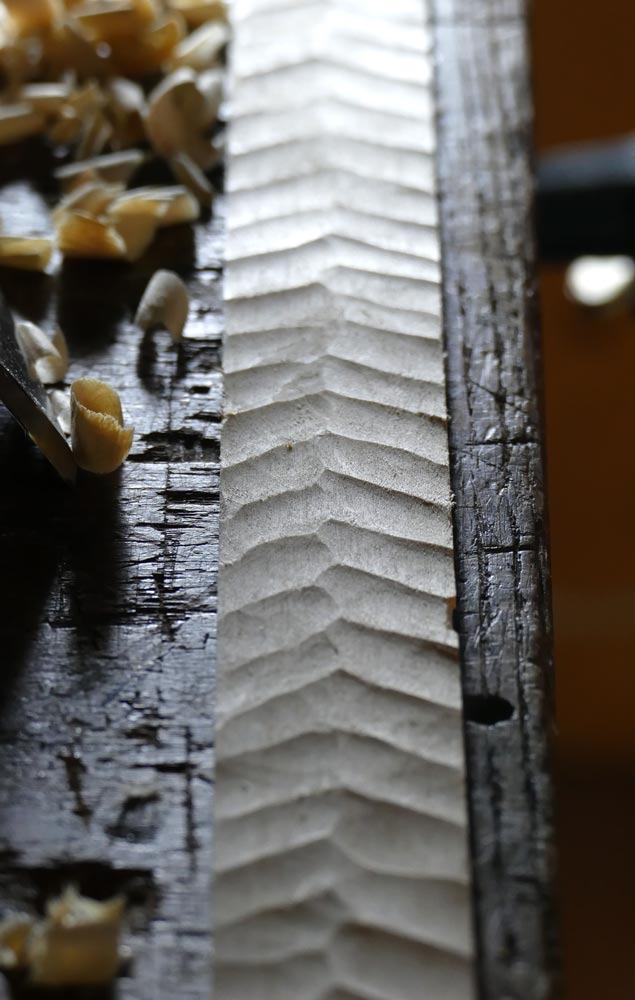 Having done the edges, I worked the middle, making a similar size cut that more or less synced with the outside cuts.  I was very excited by the effect, which I thought quite reptilian. 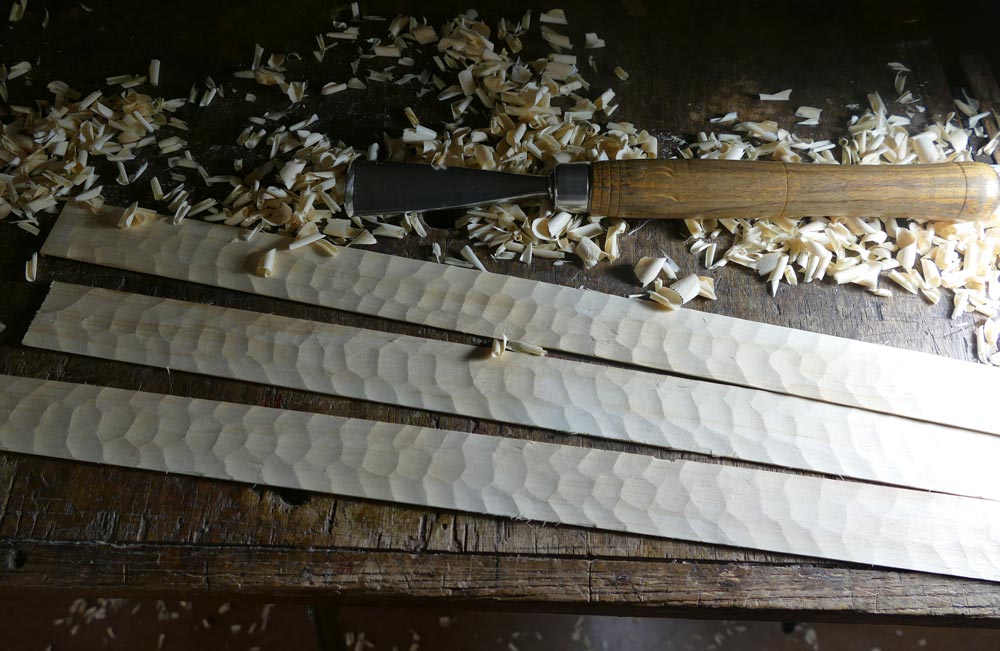 When I first thought of making the ribs by carving, I guessed that when I bent the ribs, the different thicknesses would lead to curves that were not smooth, but more dynamic (desirable under the randomness rule).  When I came to bend them however, I found that this was hardly the case and I was quite disappointed by the smooth curves that appeared.  Luckily, at a later stage, I found another way to disrupt the smooth outline.

Following the “few tools as possible” rule,  I tried to do all of the carving with one gouge. The top had some grain run-out so I found that in order to meet the “clean cuts” rule, I had to work on the diagonal. This gave a very dramatic result with flutes rising steeply from the bass to the treble side of the plate. However I found the pattern a little too coarse for the instrument overall, plus it didn’t tie in with the back, in which the grain naturally led to horizontal flutes. Neither did fluting relate to the sides which already had a divot pattern. So, somewhat reluctantly, I turned the flutes into divots.  The divots retained traces of the underlying diagonal pattern and developed other lines as I worked the gouge along the natural cutting direction of the wood.

The fluting pattern seen here is familiar to violin makers but rarely seen by those outside the trade until the advent of Facebook and Instagram, where we all eagerly shared images of partially constructed instruments   I’ve always loved this stage in the carving, which to me is organic and dynamic, and it was one of the things that I particularly wanted to celebrate via this instrument.  You might think that forming an subtly arched plate by using such a crude tool requires a lot of skill or bloody minded determination. In fact it is easier than it looks and is capable of nuance. It is simply a matter of keeping the crests between the flutes parallel, like contour lines.  The shadows cast by the crests make the arch visible in a way that is lacking in a smooth surface.  I first saw this technique used by my father in some of his wood carvings, and I wondered that such a coarse texture could portray such subtle lines. This current piece is in part a tribute to those carvings. 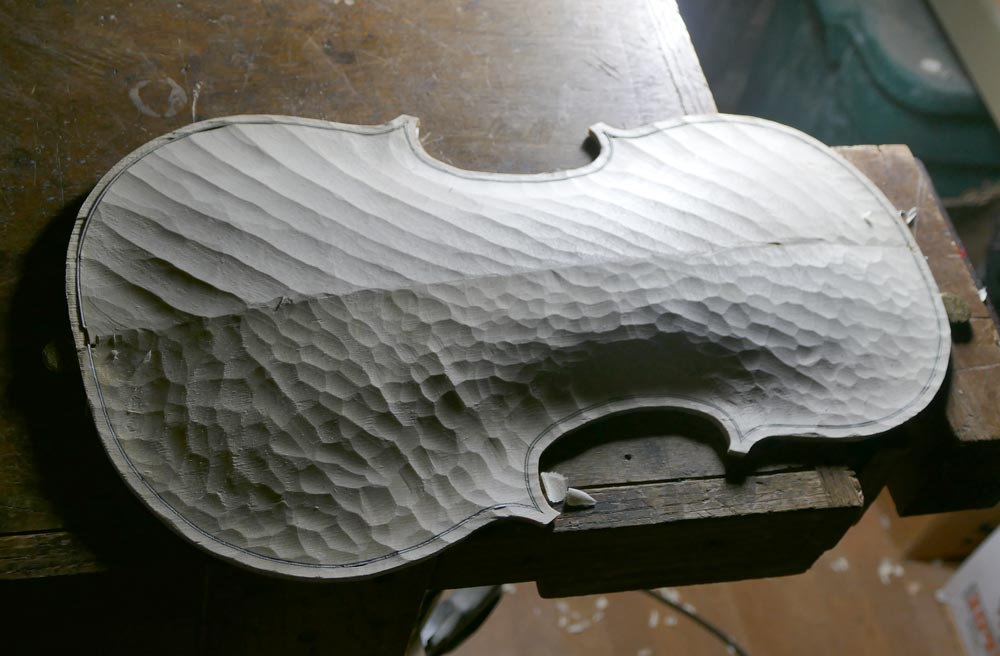 The outline and fluting

As mentioned before, the outline came out with mostly smoother curves that I had hoped. I applied a line of purfling in the usual way, parallel to the outline.  After the purfling is in place, it is usual to clean up the surface by cutting a smooth gouge line, or flute, that follows the purfling around the instrument. That fluting is then usually blended smoothly into the rest of the arching.  To blend with my textured plate, I cut a divotted fluting rather than a smooth one.  I then picked up those divots and carried them around the edge of the plates, giving me something of the wavy outline that I had been hoping to achieve. 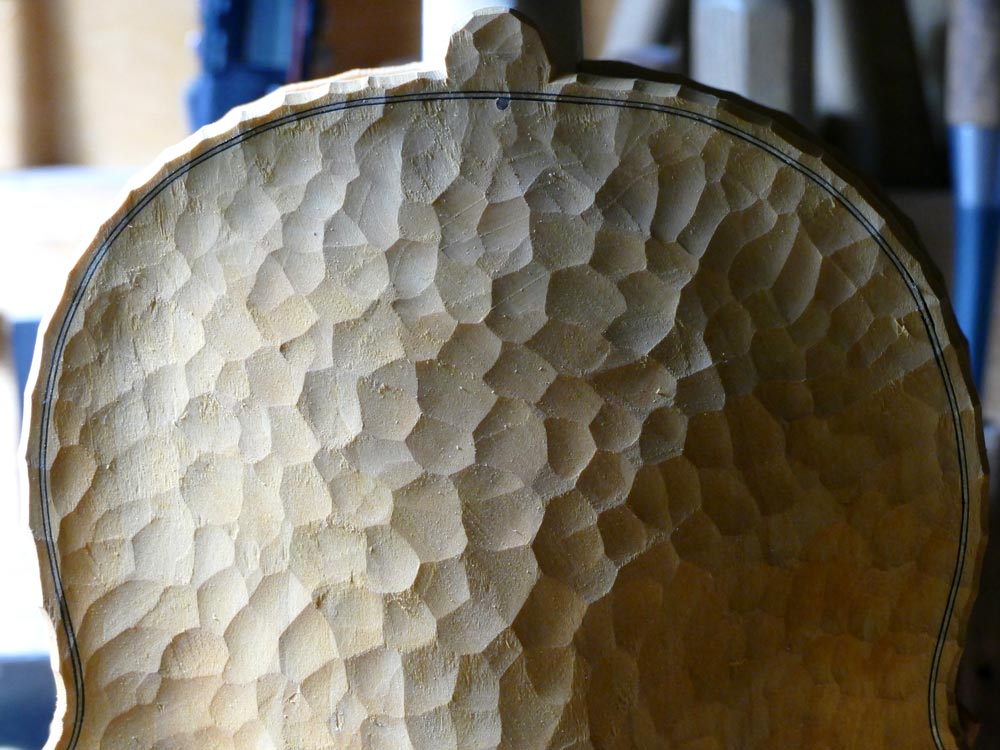 I cut the F-holes with some discontinuities in the lines to try and match them with the feel of the rest of the instrument.  I now think that I could have been more exaggerated with this since, relative to the choppy surface around them, they seem rather passive.

In carving the purfling flute, lowering the lower f-hole wing and working the arch in the C-bouts, I had to switch to a smaller, gouge with a tighter radius, but I tried to keep the cell size of the divots the same as elsewhere. 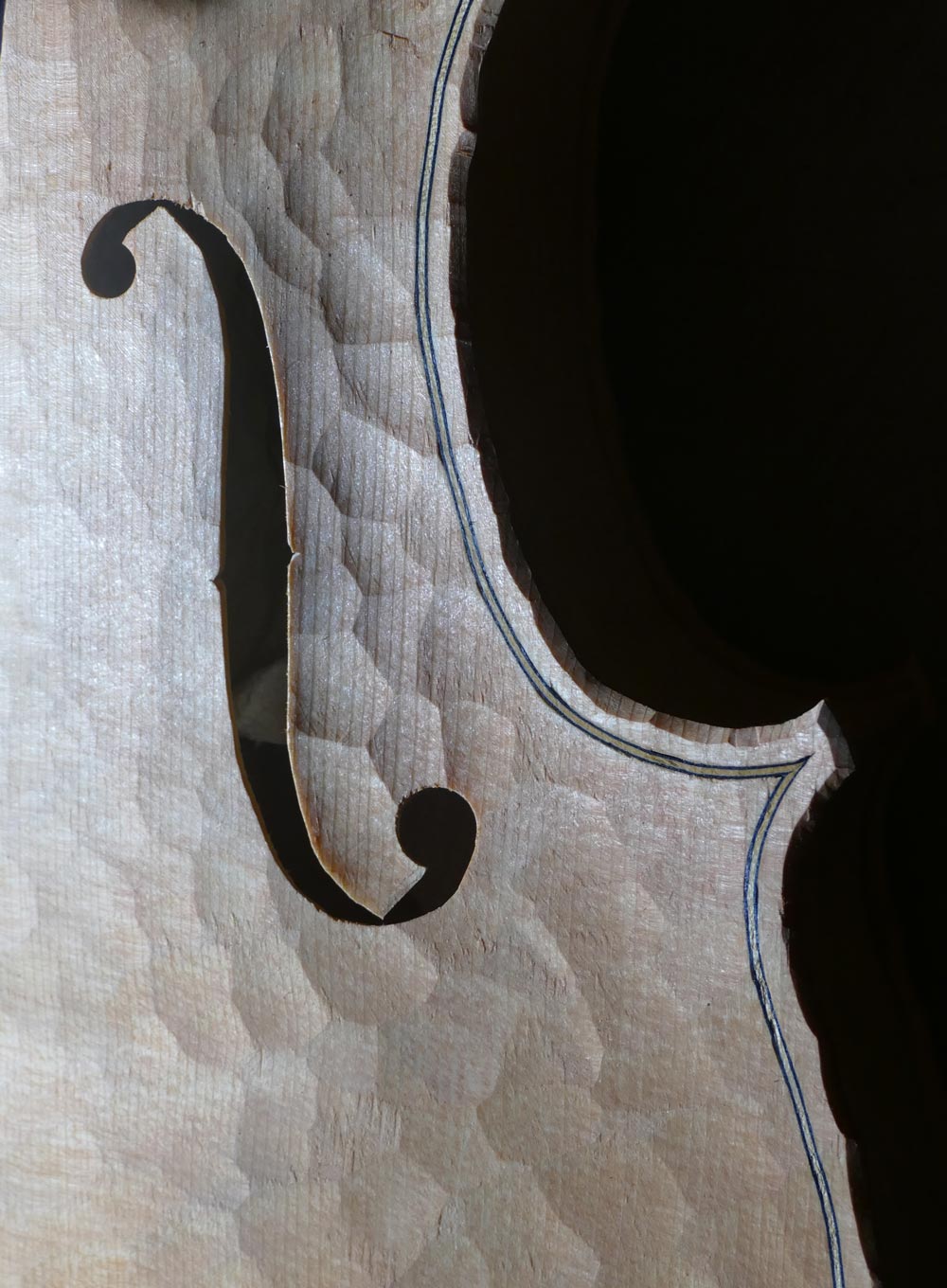 No planes or scrapers or files used. Just my large broad arching gouge and two other round-ended chisels. 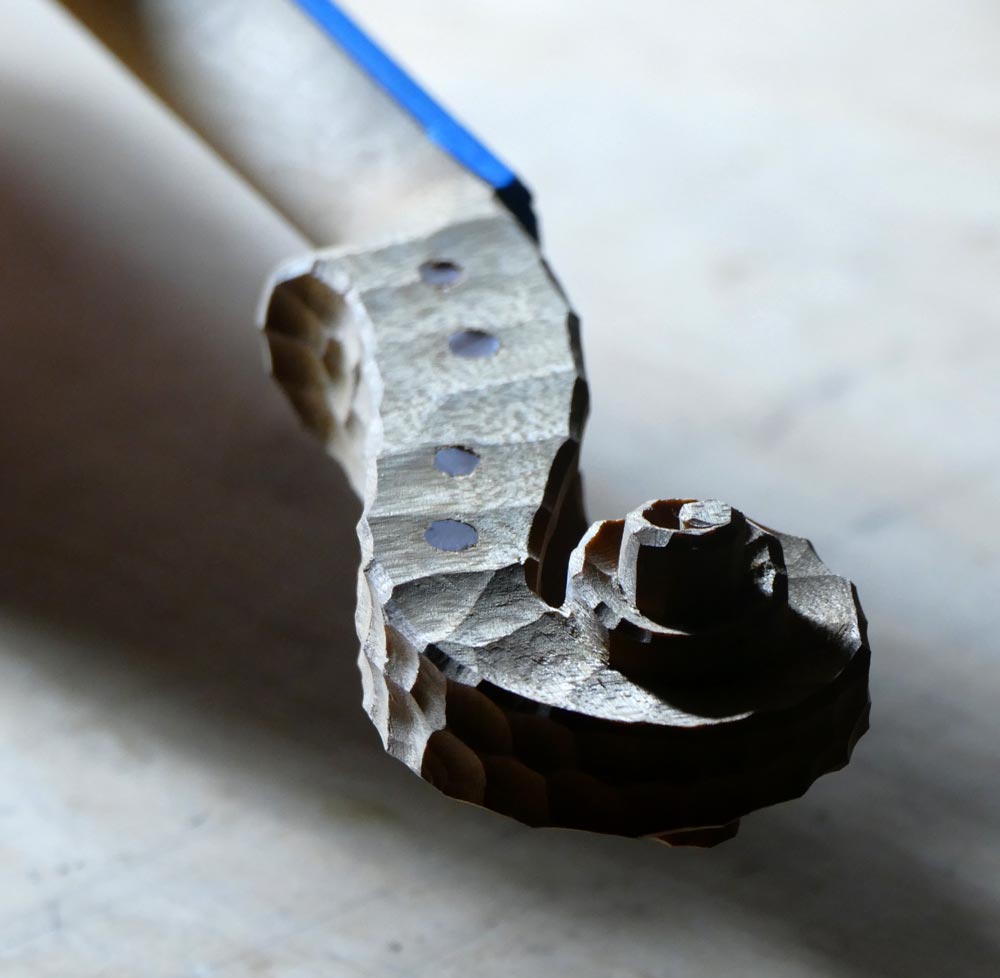 Adding varnish totally transforms the appearance. Suddenly the divots, which were only visible in a raking light, are also revealed by reflected light.

In discussions of the function of varnish in violins, I usually hear that its purpose is to “protect the wood from dirt and to bring out the beauty of its grain and figure.”  I would argue that it has an equally important function in conveying the shape of the object as reflections, as well as shadows, move across the surfaces.

The surface reflections of the varnish also tell us a lot about the texture of the surface: a hard-edged reflection indicates a clean smooth surface, while a soft edged reflection indicates a scratched or dusty surface.  Hard reflections suggest Appolonian cleanliness, youth and vigor, while satin surfaces are friendlier. A dull surface might suggest disuse and neglect.  An object that combines a range of reflective qualities, from dull to sharply shiny, suggests an object with a history of continuing use and is the most compelling of all.

The light coat of varnish seen in the following pictures serves to highlight both the surface texture of the natural wood and the crisp tool marks. This gives the work freshness and vigor.  As more varnish is added, the wood texture and the clean tool work is obscured, which is regrettable.  What is gained on the other hand, is a greater richness in color, as will be seen in part 2. 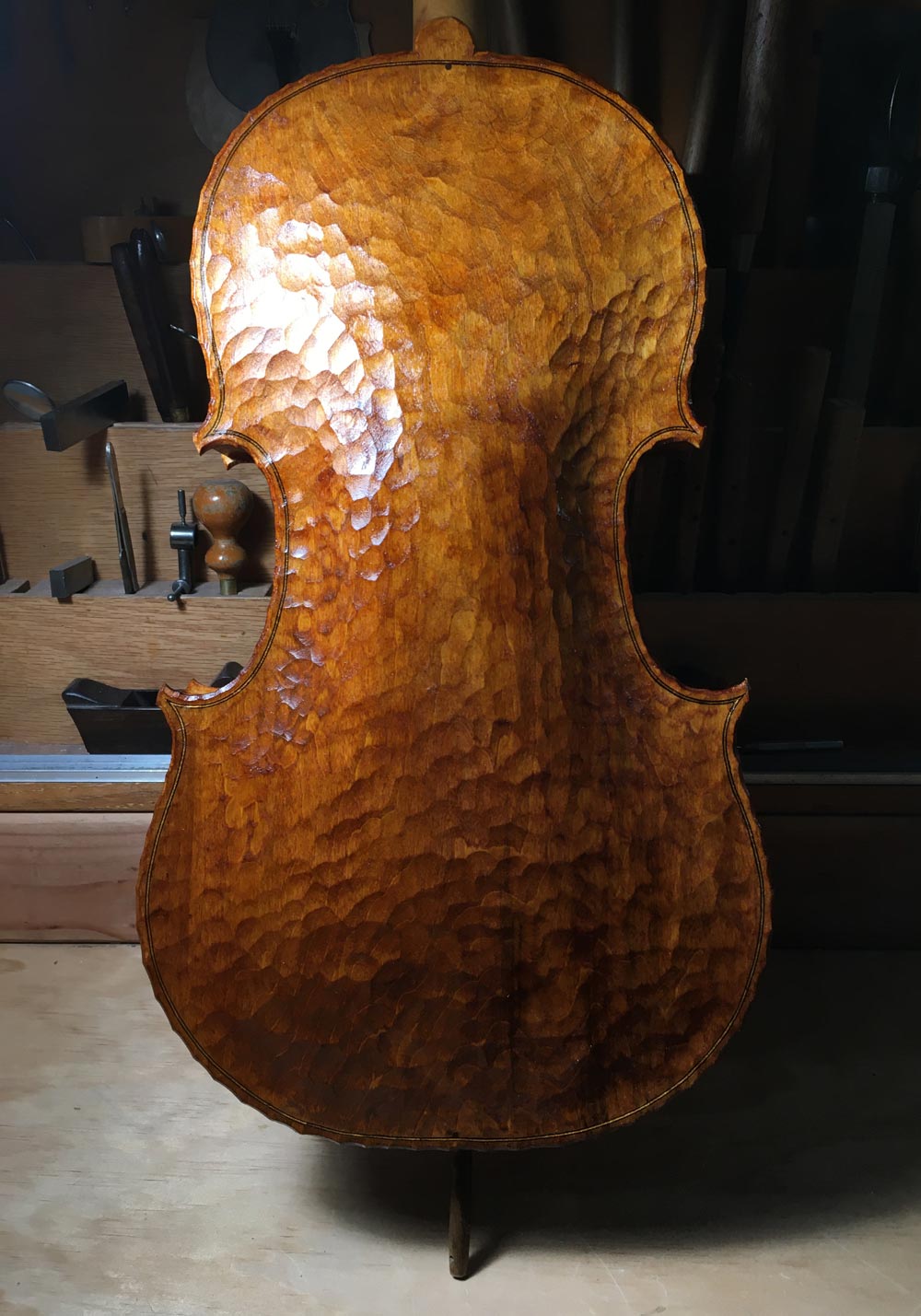 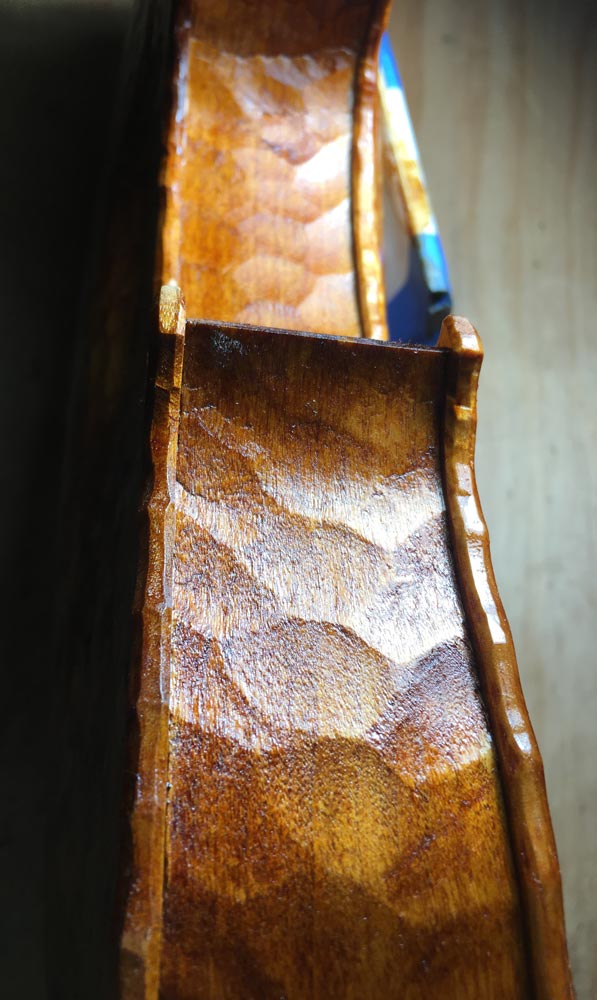 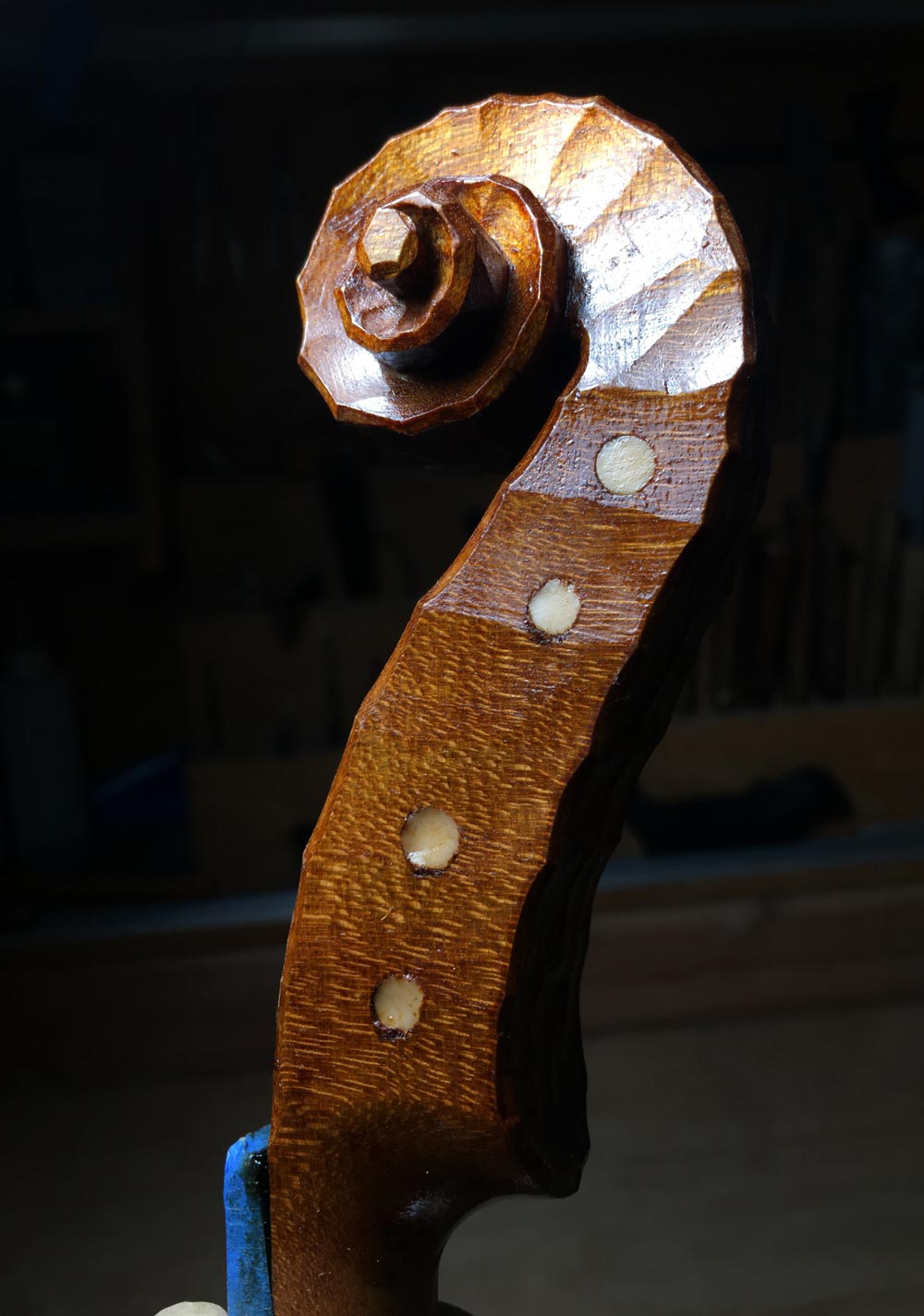