I was at the Oberlin violinmakers workshop again this summer, sharing workbenches and ideas with sixty five talanted makers from around the world.

With advances in measurement technologies and through a culture of free sharing of ideas and information, some gifted and diligent makers are doing exquisite  and enviable work,  the art of making replicas of Classic  Master Violins is moving ever closer to reaching perfection. The rest of us are following along as best we can and general standards are unquestionably rising.

In the midst of all this accomplished endeavor I found myself troubled again by the feeling that we are chasing our tails!  Where is all of this ultra-detailed copying of a handful of old instruments leading us? If we manage to make a perfect replica of an old violin, as it appears today, then what? And by concentrating so much on the quantifiable aspects of the old instruments, what else about them are we possibly missing? I think that concentrating on producing a perfect replica is a circular, limited activity, whereas  the great instruments if the past that we admire, were made with  more directional, exploratory intentions. If we concentrate only on reproducing the dimensions of older works we are limiting ourselves.

It seemed to me that old violins need not be the only inspiration that we bring to our work. While still being respectful of tradition and of practical violin making considerations, couldn’t anything that inspires us in the outside world be the germ of excitement in our own work?

With these thoughts in mind, and finding that that I had a little extra time on my hands, I decided to try an exercise or study in bringing some outside inspiration into violinmaking.

The Oberlin Museum of Art has an outstanding collection of Japanese wood block prints. I found one by Tasukioka Yoshitoshi, called “Shōki capturing a demon in a dream“, that I particularly liked.

There are two things about the print that excite me; firstly, this image comes from 1890 yet it is so modern looking thatI could have believed that it was drawn last week by a contemporary comic book artist. The second is technical; the printing process is quite complicated, including hand carving multiple wooden blocks, one for each color. Each of the blocks must align perfectly with the previous one. To get the thin black lines that you see, all of the surface of the block except for the black line must be carved away.

Somehow, through all of this process, the flow and dynamics of the  brush work of the original ink drawing has been retained in the print. Here was something that inspired me. How could I transfer something of what I like about the print into my own work?

I set myself to answer this question : if Tasukioka Yoshitoshi had included Shōki’s violin in this picture…… what would it look like? I decided to make the scroll for that instrument.

Looking at the print I see a variety of lines used: the bedroom drapery in the top right uses long smooth sweeps with gradually swelling lines, suggesting peace and calm.

Shoki on the other hand is all electricity and agitation. The lines of his robe are jagged and vary quickly in thickness and direction. Shoki’s hand is very  angular, all muscle and sinew.  His sash whips through the air in flowing sweeps that change direction suddenly. 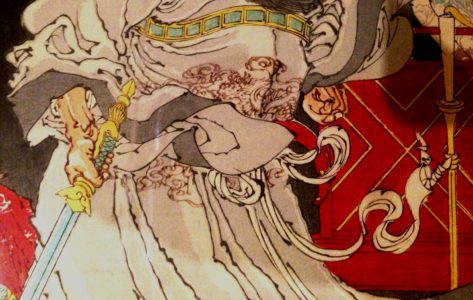 Attempting to capture some of the masculinity and agitation in the image, I cut the scroll very quickly using the biggest tools that would do the job.  I used my broad flat rough-arching gouge to shape the peg box walls and the first turn of the volutes. I was trying to use as few cuts as possible as this tends to give more life where planes and lines intersect. I think that the slight scalloping on the pegbox walls gives the impression of muscle beneath the surface.

The first turn in the head of the scroll was made with approximately 10mm wide facets which I didn’t attempt to round. To mimic Yoshitoshi’s brush strokes, I cut the chamfer with long, fast strokes which varied in thickness from start to finish and didn’t necessarily blend smoothly one into the next. For fluting the volutes I made as few cuts as possible. All of these various types of cut set up their own visual rhythms.

As always when working in three dimensions, the interesting stuff happens where planes intersect: The outline of the scroll, the fluting of the volutes and the chamfer that joins them are all faceted. the facets on each of these planes have their own semi-regular rhythmic intervals. Where these planes and facets meet they are sometimes in sync and sometimes they clash. The effect like a Philip Glass music composition with intersecting rhythms.

When a pattern or rhythm appears we naturally want to follow it, and it was very tempting to pick up the facets in the outline and repeat them in sync in the chamfer and again in the volutes, but I was worried that the effect would be too precious and ornamental. I wanted to preserve the randomness and surprise that gives tension to the Yoshitoshi drawing. 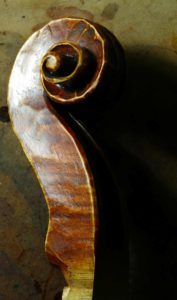 In Yoshitoshi’s print, Shōki’s body forms a broad sweeping S-shape. I tried to capture some of this  line in the back of the peg box, making it bend to one side with a little kick back at the chin. 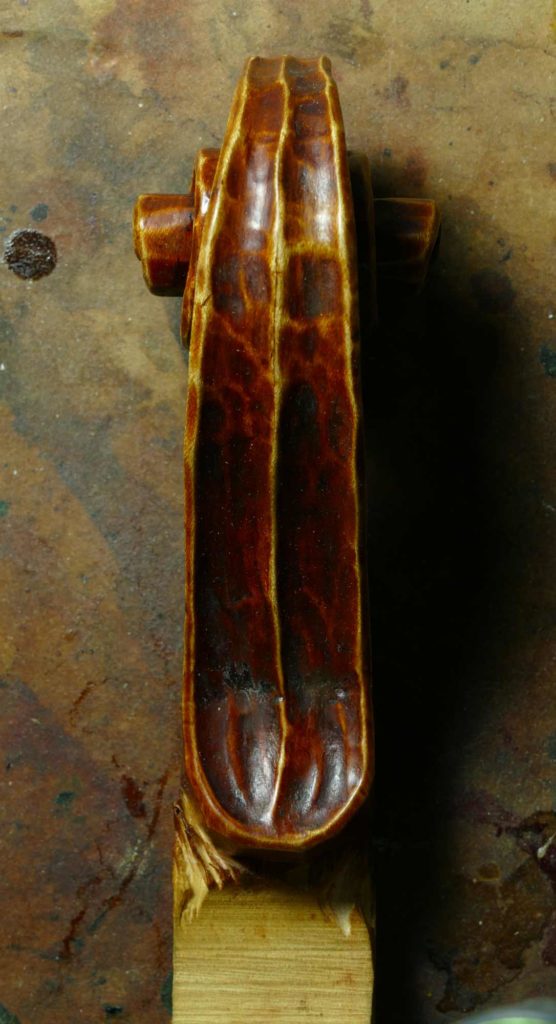 I feel that the overall result does have a lot of power and dynamics.  In parts it fails, but the possibility of failure is the spice of improvisation. Because I didn’t over-formalize the rhythms that were created,  there is a lot of suggestion here. I see a lot of organic shapes – seahorse, crinkled cabbage, dead leaves, sea shell… each of which could be the subject of another study. 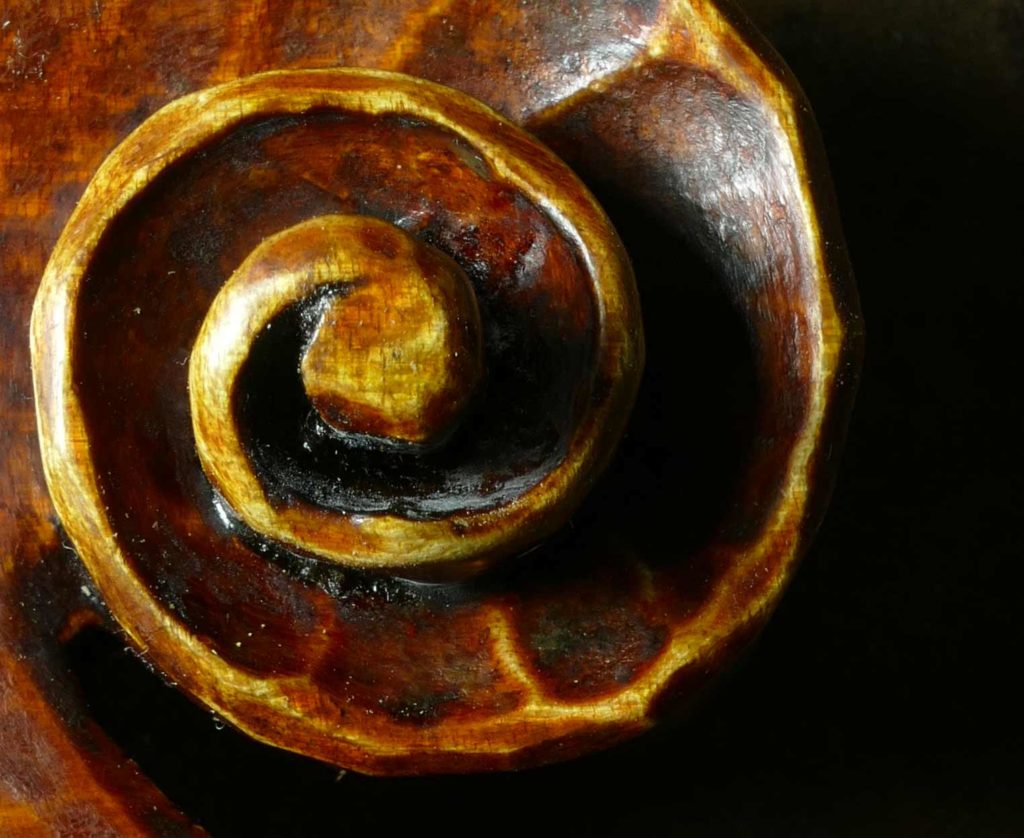 I wonder what the rest Shoki’s violin would look like?