A correctly dimensioned and properly positioned neck is crucial for the functionality of an instrument. A skilled violin maker can also use the neck to make significant tonal adjustments. There are many variables in neck dimensions and most makers have their own views on what is optimal. If the neck has been broken, or excessively worn, it may have to be replaced. In this example the old neck had an accumulation of minor problems and the quality of the instrument justified the expense of fitting a new neck.

The procedure outlined here is the same as that to which most classic period instruments were subjected in the 19th century when the broad, low angled baroque necks were replaced with modern necks.  The scroll, which must be preserved as part of the original instrument, is grafted onto a block of wood which will be used to form the new neck.

Problem 1: Head crooked on the neck

It can be surprisingly tricky to get the head in line with the neck. If the head is twisted or warped you may have to choose between aligning the front view or the rear view or splitting the difference. I felt that this one could be done better. 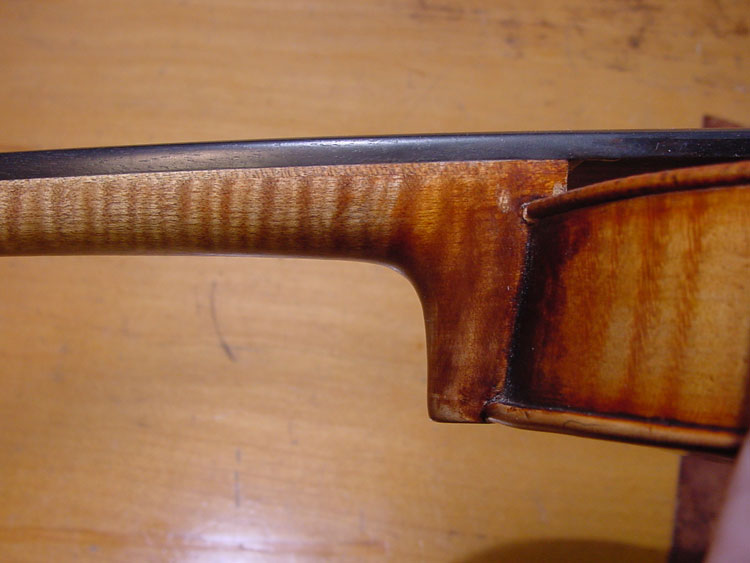 This neck was been “wedged”; a maple fillet has been added under the fingerboard to increase the angle at which the neck meets the body. This is a valid repair when the only problem with the neck is the neck angle, and when the cost of replacing the neck isn’t justified. This job could have been refined by making the wedge out of ebony, which isn’t so immediately visible. Also the neck, which has become rather thick, could be reshaped.

Problem 3: Neck not aligned to body 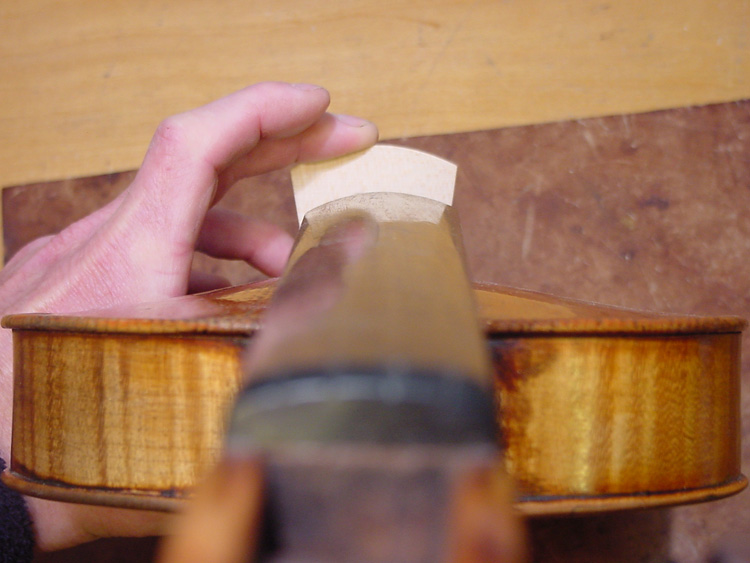 Sighting down the fingerboard to a bridge placed centrally between the ff-s shows that the neck has been stuck on crooked. This is the most serious of this neck’s problems. If the fiddle is strung up like this, the bridge will be pulled towards the bass side by the strings, and the tone will probably suffer. There is really no cheap fix for this; removing and reglueing the fingerboard will make the strings run along the middle of the board but the string pull will still be uneven.

Considering the multiple defects, and that it is a nice fiddle that deserves better, it’s time for….. 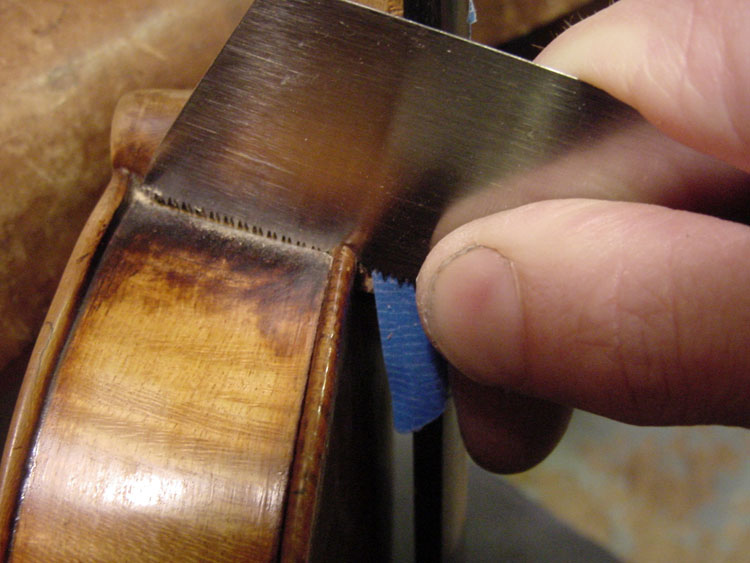 A thin-kerfed saw is used to cut each side of the neck root to the depth of the old mortise. If the two sides of the neck joint are not completely released there is a real danger of splitting parts of the ribs off as the neck is removed.

Free the neck root at the button

This Japanese saw, designed for making a cut in the middle of a panel, is ideal for starting the cut to detach the neck from the button. The curved blade helps to avoid accidentally cutting the ribs. Incidentally, notice how small the button is, it has been trimmed after a previous neck resetting. This is very bad practice but tends to happen when it is not cost effective to do the job properly, ie by making a new neck. Before setting the new neck, I will build this button back up with an ebony crown so that the finished neck will have the correct dimensions for strength and looks.

Cut down into mortise 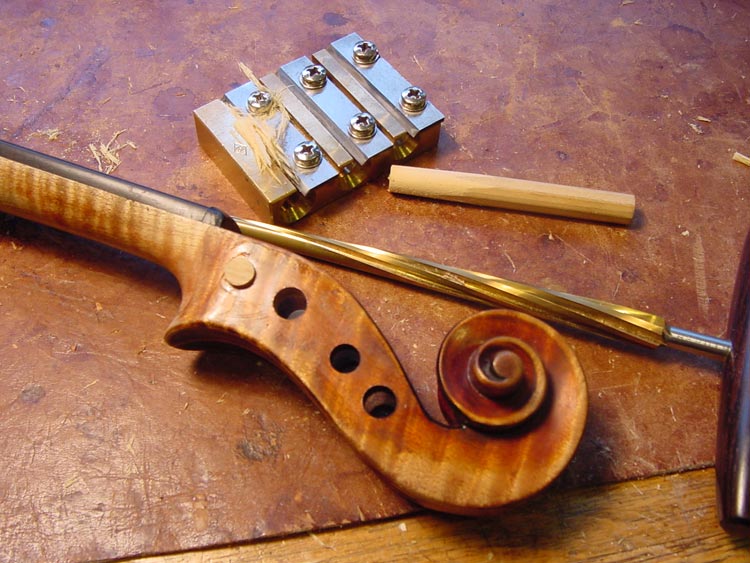 When the violin head is spliced onto its new neck, the joint will extend up inside the peg box as far as the G-string peg hole. To provides a solid, continuous surface to work with when splicing in the new neck, the first two peg holes are filled with a wooden bushing. If the peg holes are large and worn this is a good time to bush all four holes so that a new set of pegs can be fitted. In this case the pegs were in good shape and had fairly narrow shanks, so it was decided to do the least work necessary and only bush the E and G. 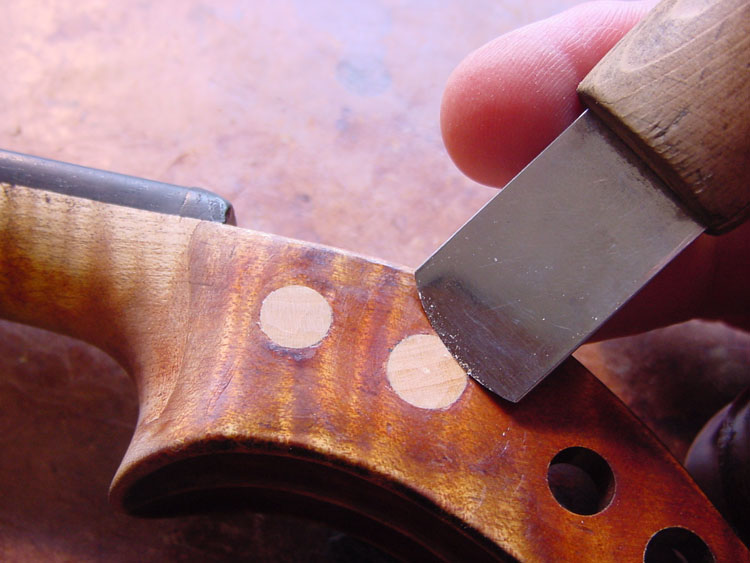 Using a shallow-sweep gouge, the bushings are trimmed off flush with the pegbox surface.

Off with its head! 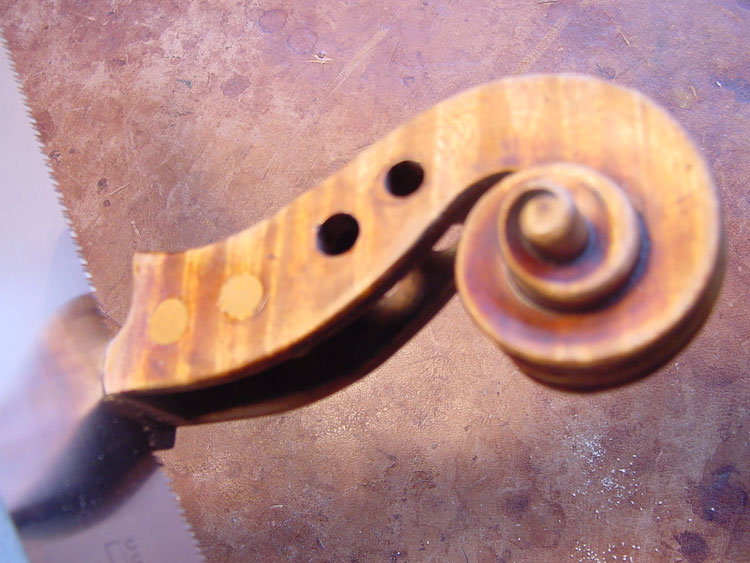 No matter how many times I do this I still feel a little squeamish. 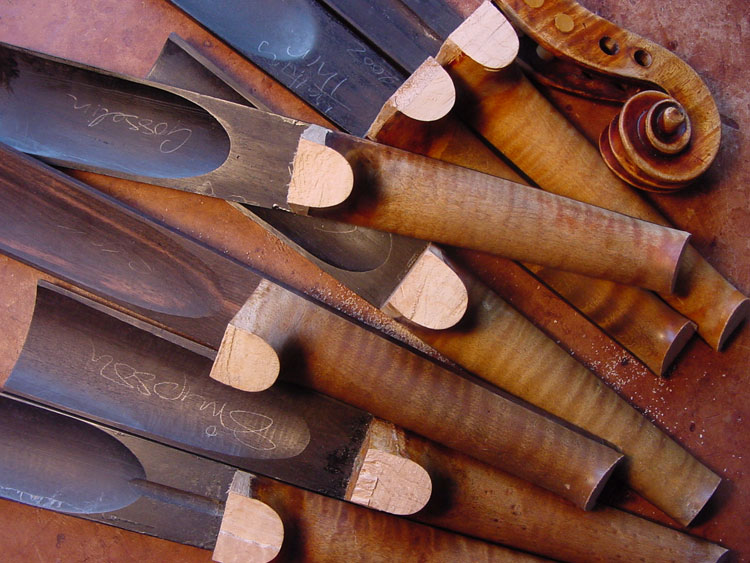 Some of the ebony fingerboards get recycled into neck wedges and top nuts; the rest are keepsakes. 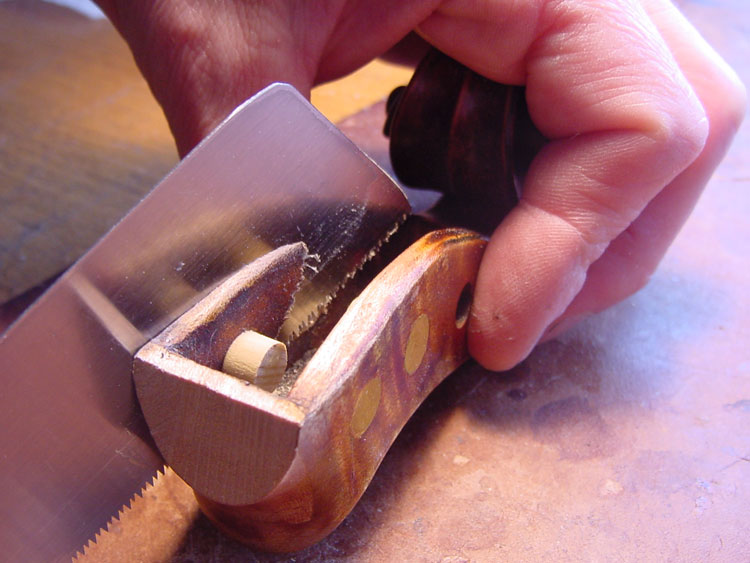 The tapered slot that the new neck will fit into extends up to the second peg hole. This gives an adequate gluing surface for a strong joint. There are several styles for cutting this joint; this is the French style and is the simplest, least invasive and is adequately strong. The English style calls for a taper that ends in a butt-joint at its small end. It is trickier to cut and gives no advantage.

Clean up the inside of the mortise 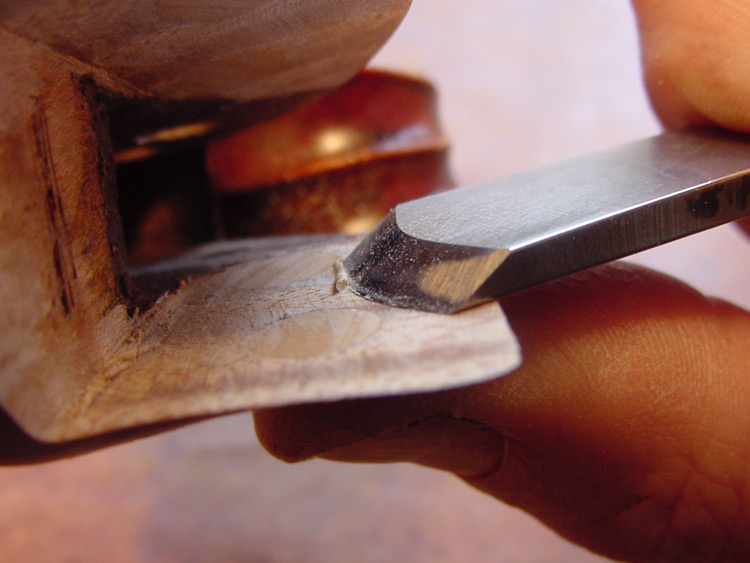 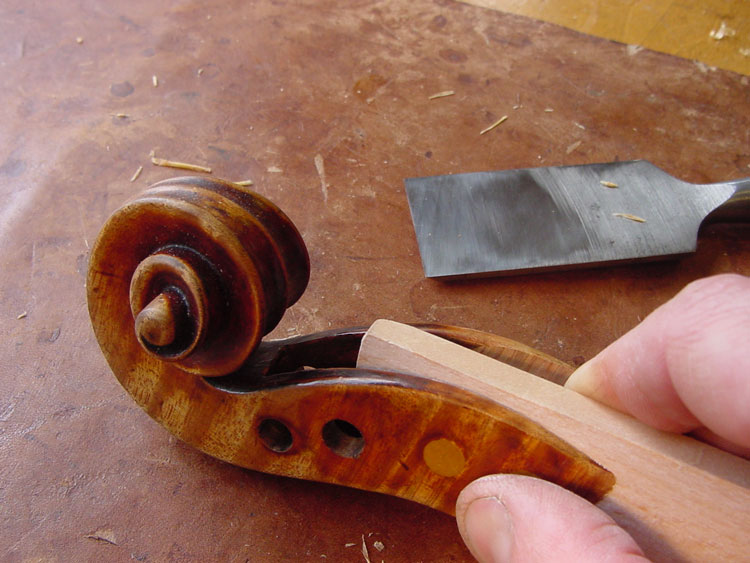 Using a “paddle”, a flat piece of bass wood, the mortise surfaces are checked for true. When the paddle fits without rocking the fit is further refined by chalking the paddle to reveal high spots. These are then removed with chisels, knives and scrapers.

Preparing to cut the tenon 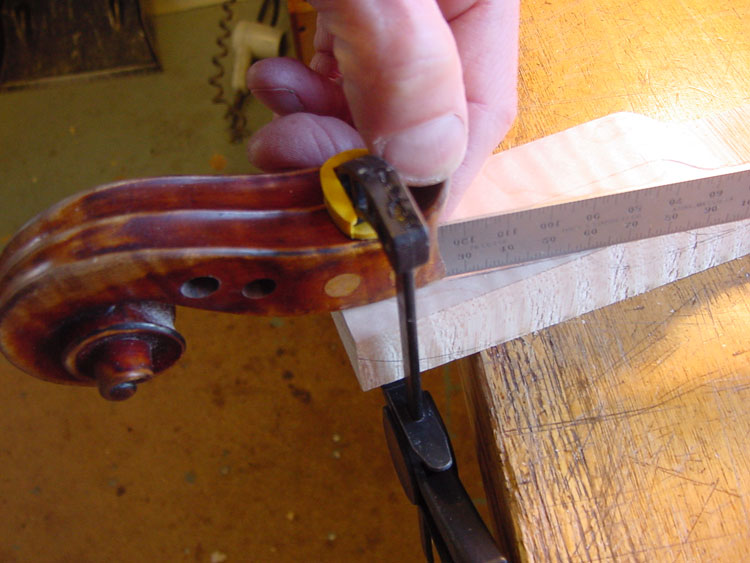 The lines of the mortise are transferred onto the new neck block.

Fit the neck block to the head 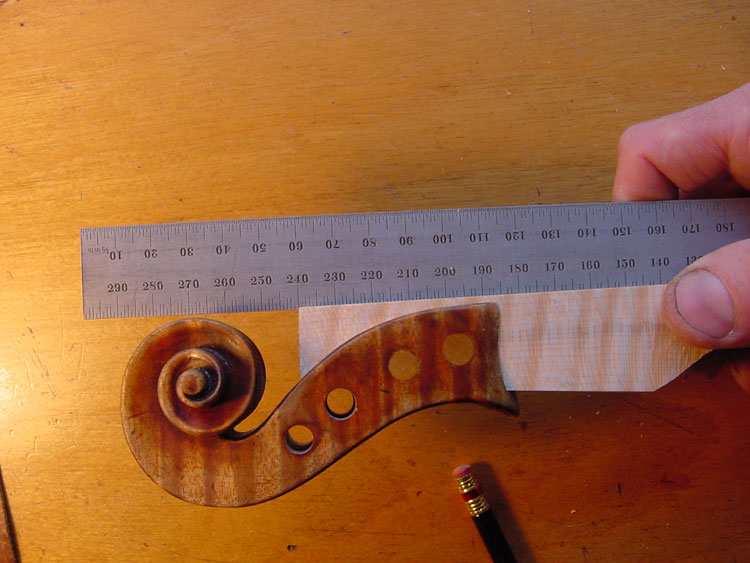 Not only do the three surfaces of the joint have to meet perfectly, but the way that the head is mounted on the neck has to be monitored. There are five dimensions to be watched; in this picture I am checking the clearance of the neck projection at the scroll. This determines whether the head looks crooked and it also ensures that later on it will be possible to plane the neck surface without accidentally planing the top of the scroll. 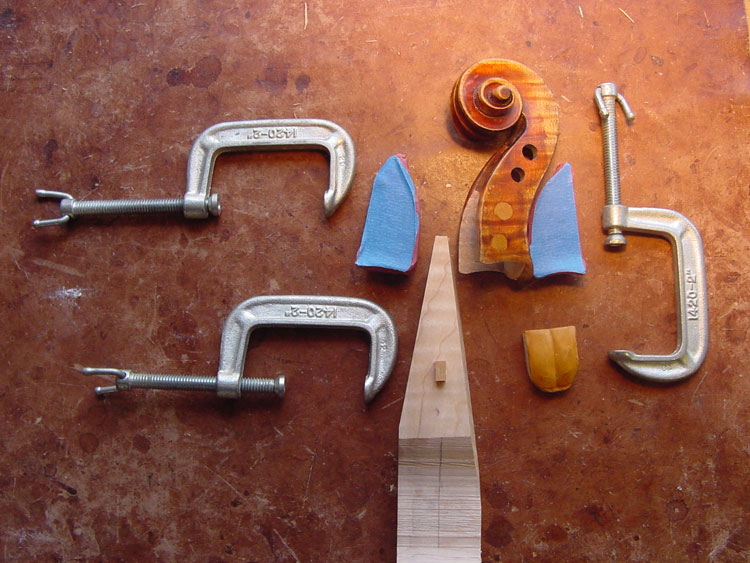 Several counter-forms are needed to successfully hold the head in place as the glue dries. When hot animal glue is applied to the mortise the water in the glue swells the inside of the thin pegbox walls, causing them to flare outwards. The visible edges of the joint no longer meet and all hopes of an invisible join are dashed. Very close-fitting counter forms are needed hold the pegbox in place. Before applying glue I cast a pair of counter-forms from dental impression compound backed with wood and lined with masking tape. Another detrimental effect of the fresh glue is to lubricate the joint so that the tenon slides in past the location it was fitted to. This would result in spreading the peg box out past its original width. A small wooden block has been glued to the back of the tenon to act as a stop. 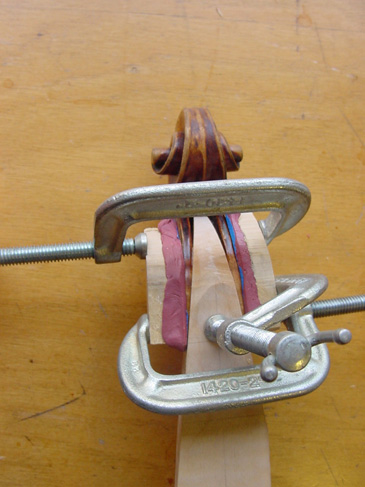 Joint glued, counter-forms hold parts in place as glue dries. The inside of the pegbox is re-carved.

A new finger board is prepared 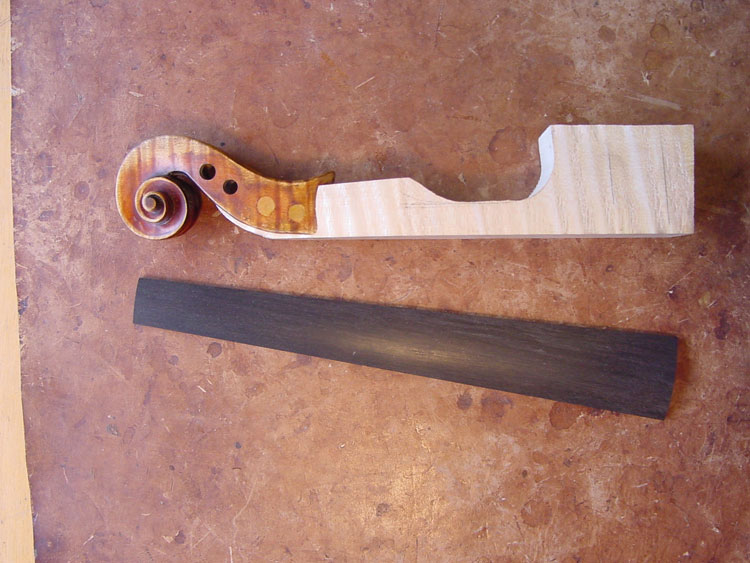 Now that the final position of the head is known more of the excess neck block can be removed.

New board in place, ready to start the neck set procedure 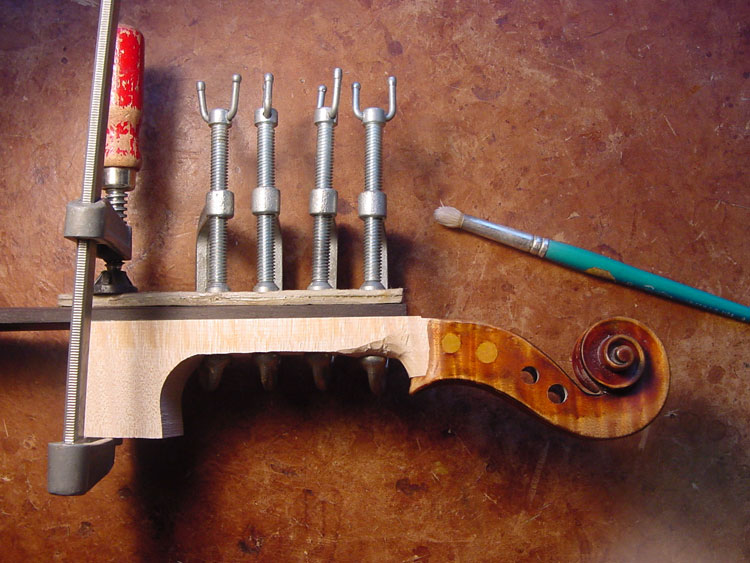