Update, Nov 2016. I recently used this LED light box to dry a varnish with a higher oil content than I usually use, and found it almost ineffective, as a result I WOULD NOT RECOMMEND using  the VUA LEDs as described below.  I did some research to source UVB LEDs and was  able to find them through Alibaba.  Unfortunately it required a custom production run and the cost to replace the rig described here would be about $9,000. I’m leaving this post up because LEDs still have some major advantages, as described below, and presumably they will become available at an affordable price before too long.  Please contact me if you have further information on UVB LEDs. Meanwhile I’m going back to the all natural, low cost, traditional Stradivari method…

A letter from Stradivari to a patron blames the lack of sunshine for his inability to fill an order for instrument in a timely manner. Oil based varnishes require ultra violet (UV) light to cure and apart from being evidence that Strad’s varnish was probably oil based, Strad’s message is also a comment on the unreliability of the sun as a UV source. In the late twentieth century most violin makers using oil varnish sidestepped Strad’s seasonal frustrations by drying their varnish in light boxes fitted with an array of fluorescent UV bulbs. These work very well, allowing curing to go ahead 24 hours a day and, with enough bulbs, at a higher rate than relying on sunlight. Now UVA spectrum LED’s are available and they offer some considerable advantages, and a few demerits as compared to fluorescent lights. 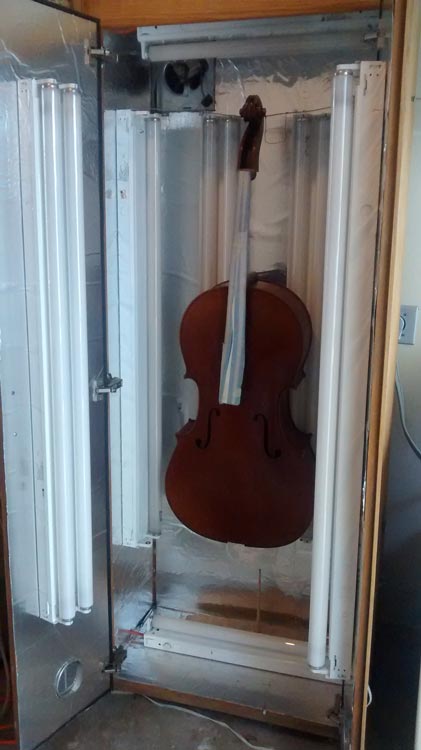 UV Light box with UVB spectrum, fluorescent bulbs. This set up uses 520 Watts for the lights. it dries varnish and tans wood very quickly, however it also gets quite hot which needs managing – see the fan in the top left. The bulb performance deteriorates after a year or so of regular use and as do the ballasts after about 5 years .

I got my supplies from Superbrightleds.com

Starting on this project I didn’t know if the UVA lights would work so I tried them on a smaller scale making a violin light box in a metal trash can. With the power supply mounted on the outside, the LED tape spirals round the inside, the metal bounces the light around, the trash can lid fits securely, the unit is light, portable and weather proof, its a really nice unit and quite affordable. I think if I was building another I would substitute the waterproof LEDs for durability. Since I do a lot of cellos I had to go bigger than the trash can, I wanted to make a cabinet based around a cylinder but in the end was forced to the conclusion that the good ol’ square cabinet with doors was the most practical and ready solution, I often have to accommodate a cello and a violin or two at various stages of finish and the square cabinet will accommodate this. I also found that melamine mdf, which I generally avoid if possible, was also idea because the self adhesive strips stick well to the shiny surface and the white color bounces the light about. 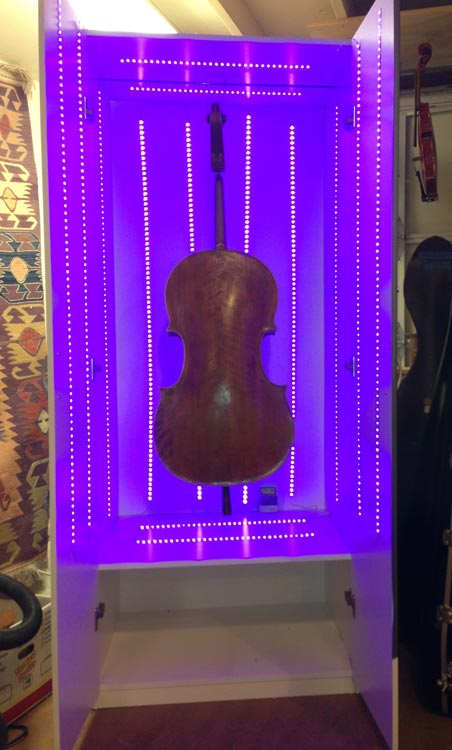 The UV LED light box built in a flat pack melamine wardrobe. It uses about 120 Watts 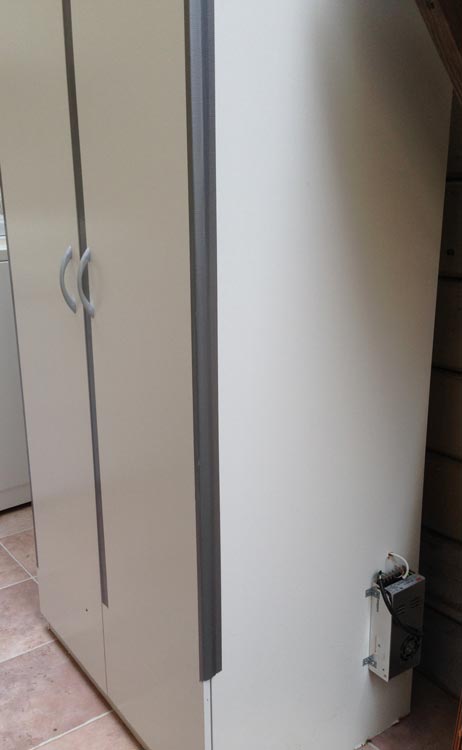 I mounted the power supply on the outside of the cabinet to further reduce heat inside the box. In fact it produces negligible heat and I may move it inside. The door edges are taped to reduce light spillage , the UVA is not supposed to be harmful in this at this wavelength, but just in case….