Searching for the spirit of early craftsmanship.

For many years I have been looking for ways to emulate the spirit of the craftsmanship that I see in the work of many of the Classic period violins. There is a liveliness and freshness in these early instruments which I feel is often lacking in later work. Even comparing the work of an extremely controlled maker like Niccolo Amati with the extremely free work of Guarnieri Del Gesu, they still share some qualities that are missing in, say, a nineteenth-century Mirecourt production fiddle.  What are these qualities?

In the classic work I think I see:

Points of violin design that require conscious decision and constraint

Parts of the the violin which accommodate freer workmanship

The Cadenza Violin: Exploration through improvisation

This is an exercise to explore the sources of variety in handmade instruments. It’s not prescribing a method for day-to-day violinmaking, nor is it trying to recreate the exact methods used by previous makers. Instead, it attempts to get at some of the spirit of early craftsmanship through working method. rather than by minute copying of details.  It relies less on templates and measurements and more on experience and judgement, and on reaction to happy or unhappy “accidents” that occur as handwork proceeds.  It is an approach that promotes what David Pye called “the workmanship of risk” as opposed to the “workmanship of certainty”.

What I wanted to do can perhaps be explained with a mixed musical metaphor:  I wanted to chart out the essential chord structure of the violin and then improvise on its themes and motifs.

I’ve called this approach variously: “Freestyle”,  “Improvisational”, or “Cadenza”  Violinmaking. It clearly lends itself more to chasing the freer spirit of late del Gesu than the control of Niccolo Amati. What I show in this post is the method that I used. What can’t be seen is the attitude. I believe that to achieve a vibrant result, regardless of how much risk or certainty is allowed, it is necessary to work with confidence and commitment, pace and rhythm. It is also necessary to accept the possibility of unhappy accidents as well as happy ones.

There are a number of practical constraints for the violin body. Here are some examples:  to give the right sound, a certain air volume needs to be attained. Air volume is affected by the finished outline and the rib and arching heights. The width of the top bout affects the player’s access to the higher reaches of the fingerboard. The C-bouts must be broad enough to produce a full bass sound, but not so broad as to interfere with the bow. The distance from the edge of the top block to the line between the bottom of the C-bouts is probably the most critical in violin design. It sets the stop-length (the amount of the string that falls over the body) and the location of the f-holes.

I was not setting out to redesign the violin,  I wanted to use dimensions that have traditionally been proven to work.  By overlaying the outlines of violins from several prominent makers, I could see where their lines converged tightly and where they diverged the most. I made a template that allowed me to mark the widths of the bouts of an “average” violin.  The template also had pinpricks to mark the length of the violin and the approximate positions of the corner miters.

Using my skeleton mold method of working on a board, I marked out my guides for the bouts and corners. 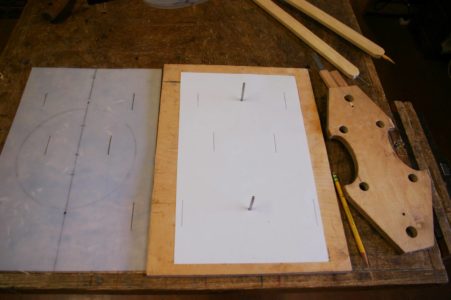 To layout  the curves for the upper and lower blocks I made a giant pair of compasses. 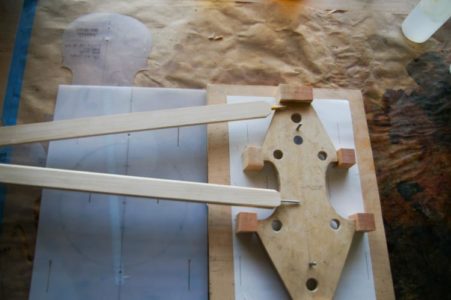 At this point I was ready to start cutting.  My skeleton mold’s perpetually astonished and distressed expression helps to satisfy my desire to shock while reminding me not to go too far. 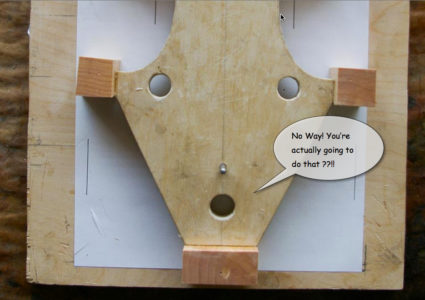 I cut the corner blocks guided by the miter tip marks, but filled in the curves by drawing on my experience of shaping hundreds of previous corners. I used the sweep of my gouge to suggest the corner shape. I was searching for a repeatable process where I could say “for this cut on this corner I use this gouge”.  The gouge shape guided me, but there was still a lot of room for variation, either accidental or controlled. Free to chose any shape I wanted, I opted to go for something similar to what I know: a Del Gesu style lower corner that kicks up quite a bit. I bent the C-bouts to be fairly symmetrical top to bottom. Again I was playing safe, going with the vaguely Del Gesu style that I know best. 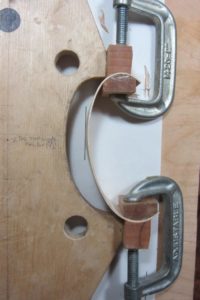 I bent the outer ribs by eye to fit the curves that I had cut at the blocks. I was careful that the ribs hit the pencil lines marked on my work board.  This ensured that I got a body shape that functions for tone and playability. You can see from my imprecise rib-bending that I was allowing a lot of freedom in the outer curves. Flow was more important than tight symmetry. 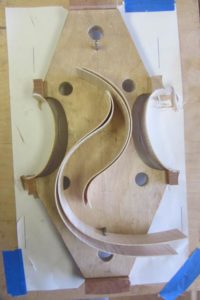 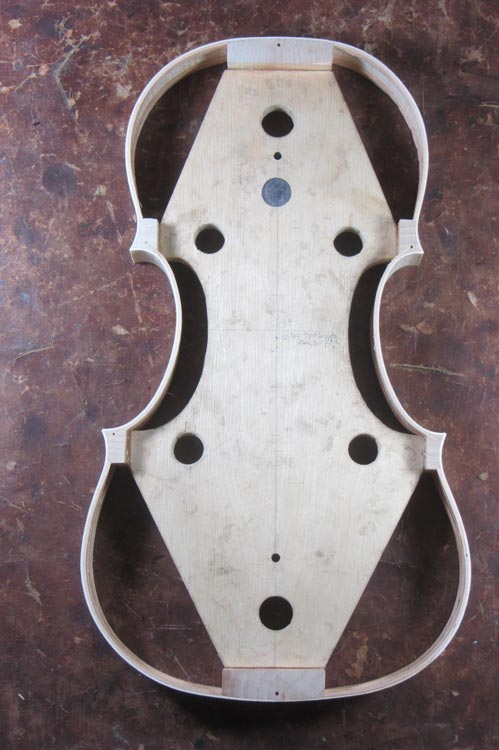 Reality check. Out of interest, I compared my rib outline to one by Guarnieri Del Gesu.  On the left you see the superimposed treble and bass rib-outlines from the GDG Korchanski violin. On the right you have the same for the ARC Cadenza violin. The degrees of freedom are reassuringly similar. 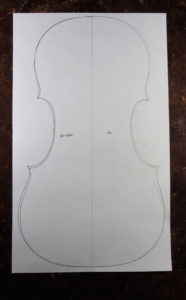 F-hole layout and design is critical to the function and tone of the violin. There is variety amongst makers and models, but certain features remain within a tight range.  Overlaying my f-hole templates for a Strad and Del Gesu violin, I found that the eyes and certain other parts of the F overlap perfectly. 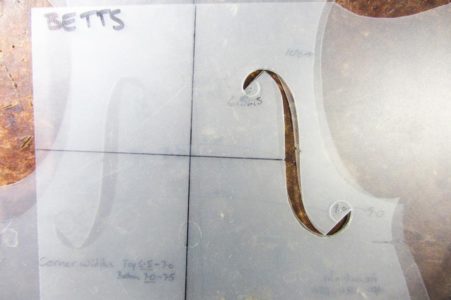 From this I created a “Universal F” template with two holes at a fixed distance and an essential path between them.  The template also had some locating marks to relate the FF’s to key locators on the fiddle, such as the lowest point in the C-bout, the Stop line, and the vertical Center Line. I also had a marker for the inner edge of the F-hole stem; I like to have the central platform symmetrical about the center-joint of the plate, because it makes it easier to point the neck down the centerline of the instrument. 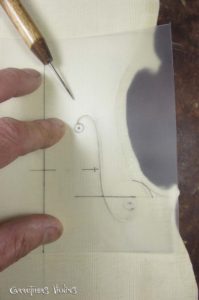 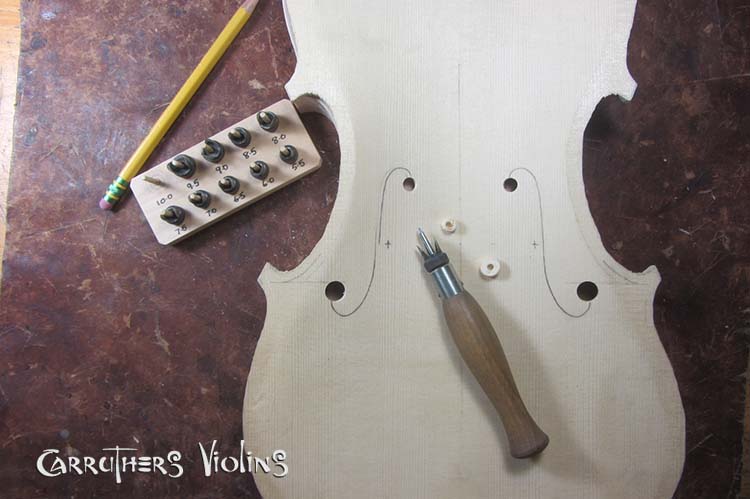 I sawed along the joining lines.  Another option would be to cut through the plate with a knife instead of a saw. Cutting in with a knife creates much more directional lines right from the start.  I’m pretty sure that in his later work, Del Gesu went straight for the knife, creating ffs that seem to fold over the wing tips.  For the spirit this exercise, I probably should have gone with the knife alone – but I didn’t. 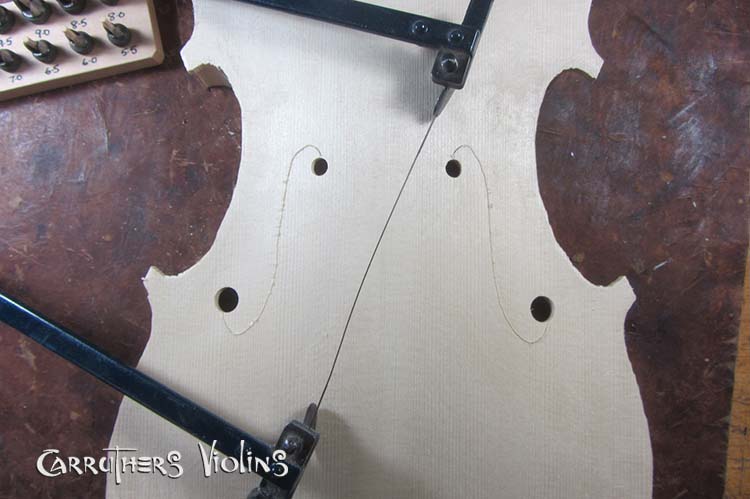 Starting to open up the FF’s with a knife. It was a much freer experience than working to a final template line, I could follow my whim and fancy.  At the point when I took the picture, I was playing with the “comma” shapes of the eyes.  I found that I could riff on any lines that appeared that I liked, but I was also guided by tradition and my internal image of what a f-hole “should” look like.

This approach lends itself most readily to late Del Gesu’s style. Most other makers have a much more formal and geometric structure to their FFs.  Then again, trying to recreate those more formal FFs using a freehand style might produce engaging results…… 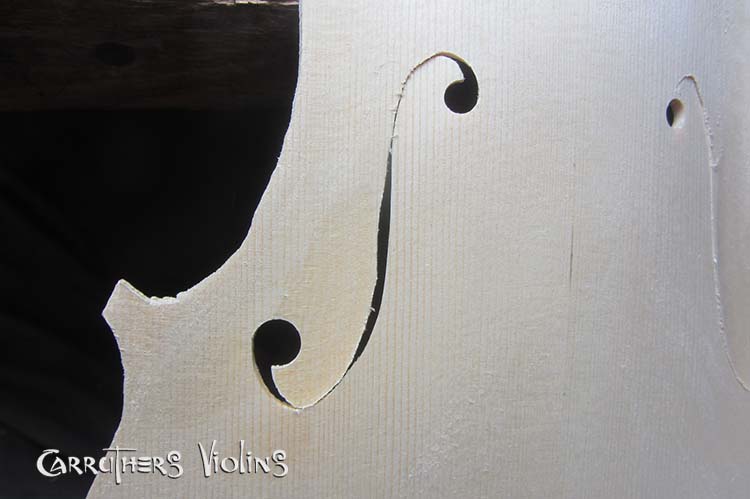 The finished FF’s.    Vaguely in the style average mid to late Del Gesu.  To my eye there is a lively dynamic and vibrancy between the FF’s 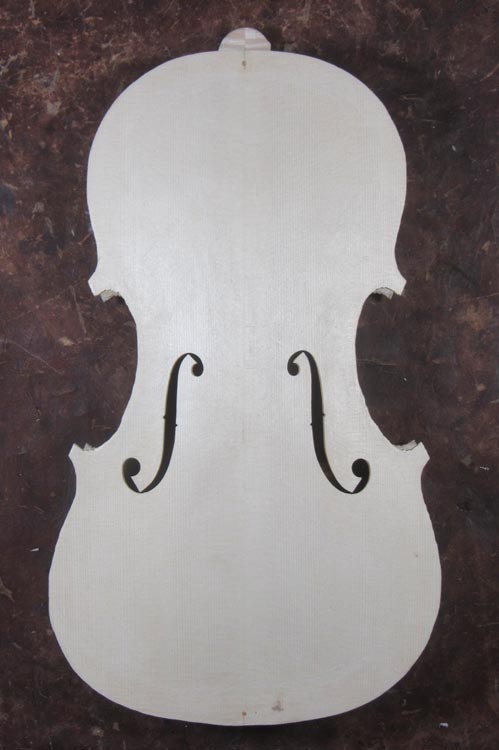 The finished Cadenza violin: probably indistinguishable from any other sloppy late Del Gesu copy.  This is hardly surprising as I cut and bent lines according to my personal aesthetic taste, and my taste has been developed mostly by making Del Gesu copies.

Working Freestyle was an exciting ride. It allowed me to take the visual vocabulary and technical skills I have acquired through years of copying other instruments, and play with them. Starting the violin with only loose goals in mind made it a much more interactive process. I cut lines in response to lines that were already there, always accepting the danger of making ugly mistakes in the hope that some visual magic might happen. I learned that the latitude for variation in violin is a little broader than is generally thought. With a little care in identifying key structural dimensions, a functional violin with dynamic lines can easily be made.

Freestyling is not the most efficient production method. Layout with templates and cutting to marked lines is a lot quicker and more precise.  But, Freestyling does lead to an entirely different interaction with the work and, for me at least, is a more engaging process.  I found the interaction between freedom and the constraint of tradition quite interesting; on the one hand I wanted to produce something lively and unique, on the other hand I didn’t want to make something that screamed “look at me!”.

I made this Cadenza violin in 2014. Fearing that my experimental approach might undermine my credibility as a serious maker, I was shy about sharing the story of its origin, but the musician who bought it said that of the instruments that he had tried, this one had hte most personality tonally.   I’ve done one more Cadenza Del Gesu since.