We have a cello in the shop with four very thin and multiply cracked ribs, the traditional fix is to repair the cracks and then  “double” the rib by laminating a second layer of  new wood to the inside of the original

When using a vacuum bag,  glue and water  on the inside of the rib can get sucked right through the rib by the vacuum and there is a chance, particularly with shellac varnishes, of water damaging the finish.  For this reason I recommend:

Note: this idea of laminating maple and silk is not our original idea, it’s been used by Canadian bass maker and innovator James Ham

Taking casts from the cello ribs 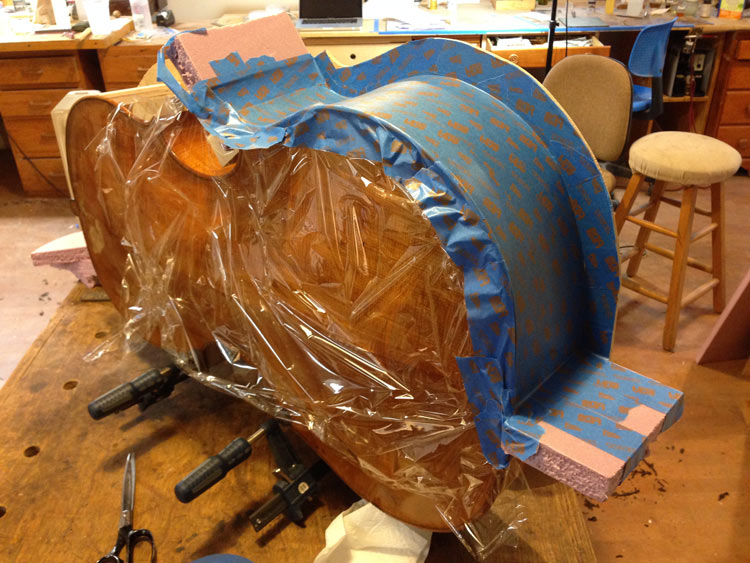 The rib is shielded using 1.5 inch wide, smooth, low-tack masking tape, if you suspect that the varnish is water sensitive, add a layer of plastic packing tape. Lightly coat the tape with mineral oil for further water resistance and easy mold release. 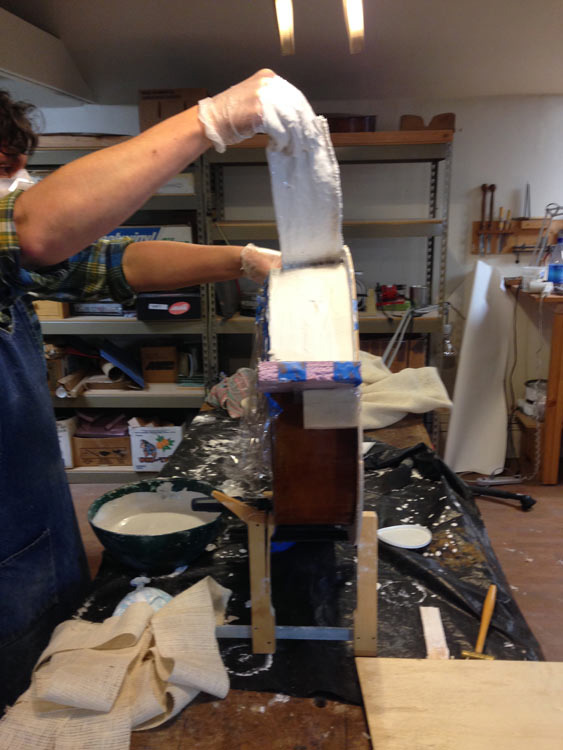 Peter Bingen lays up a cello rib mold. Mix a small batch of plaster, wait until it starts to go off and trowel a thin (approx. 10mm) layer of plaster onto the rib. allow this to set for about 15 minutes then mix a second, larger batch of plaster, again wait for it to start going off and lay up 3-4 layers of plaster-impregnated burlap. 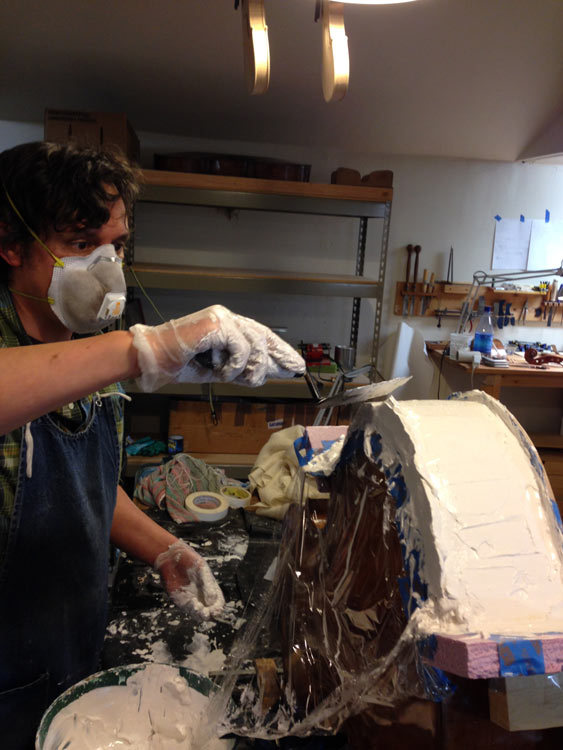 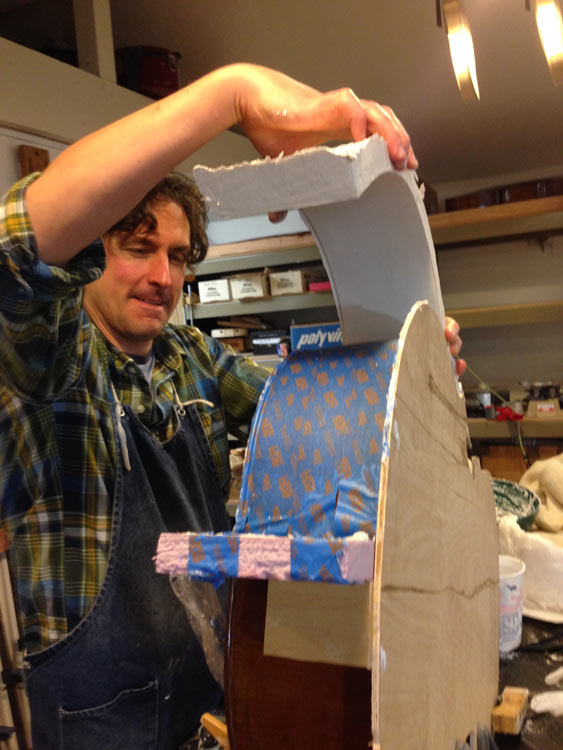 When the plaster begins to heat up it’s time to remove the mold. The resulting cast is very strong,  I whacked a test one down onto the workbench and while it cracked in the middle the two halves stayed in place, perfectly aligned. It is tried and true technology, I remember my father laying up molds this way with plaster and burlap, for bronze casting. 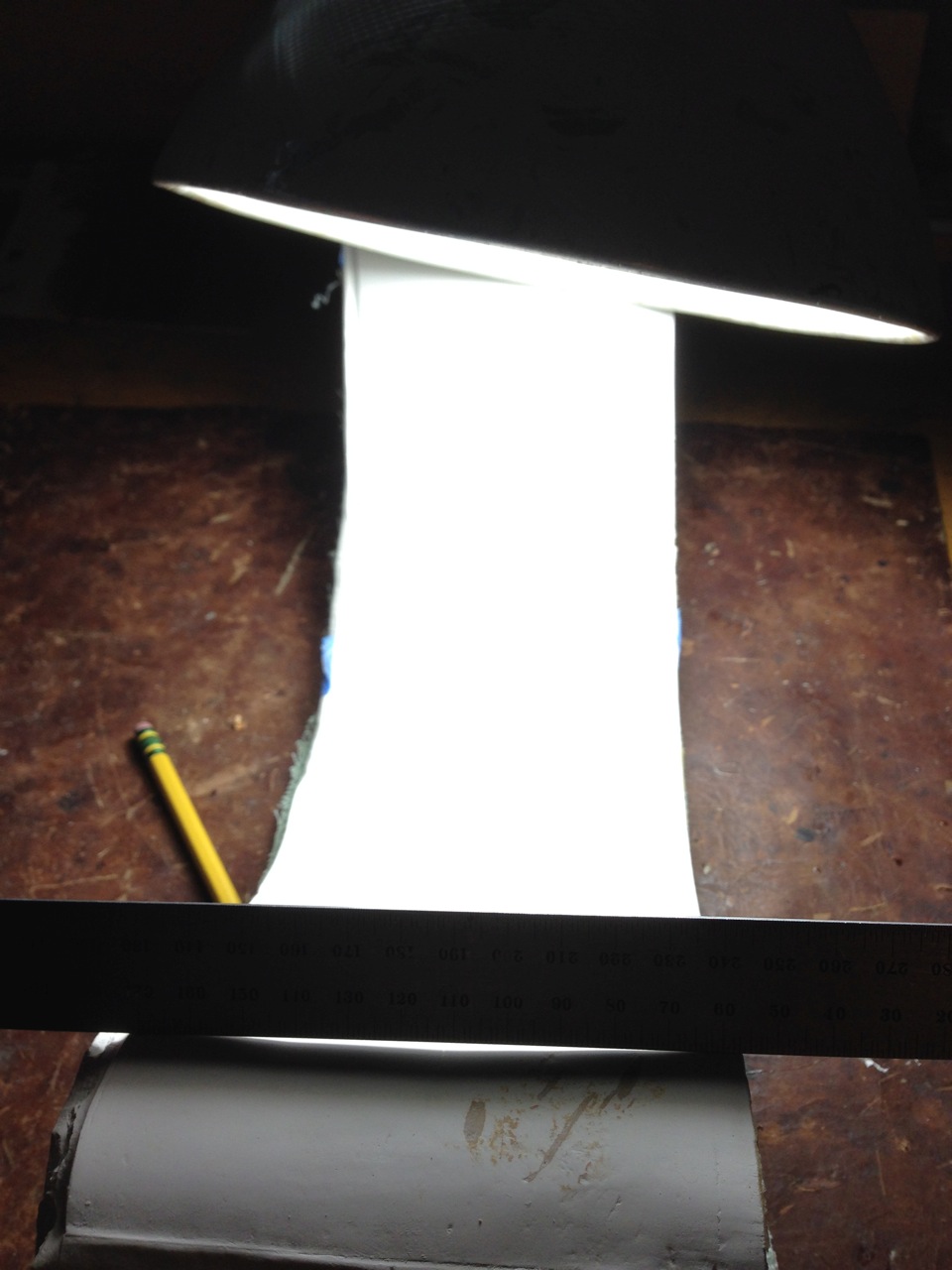 While we want to preserve the natural shape of the rib some corrections are need, for example at the corner recurve the rib needs flattening so that it can be joined to the corner block. (in fact the rib never fitted the corner block properly which is part of the reason that it cracked all the way through to the end. In this repair we also have to add more wood to the curved face of the block so that rib and block can finally be united <3 ) 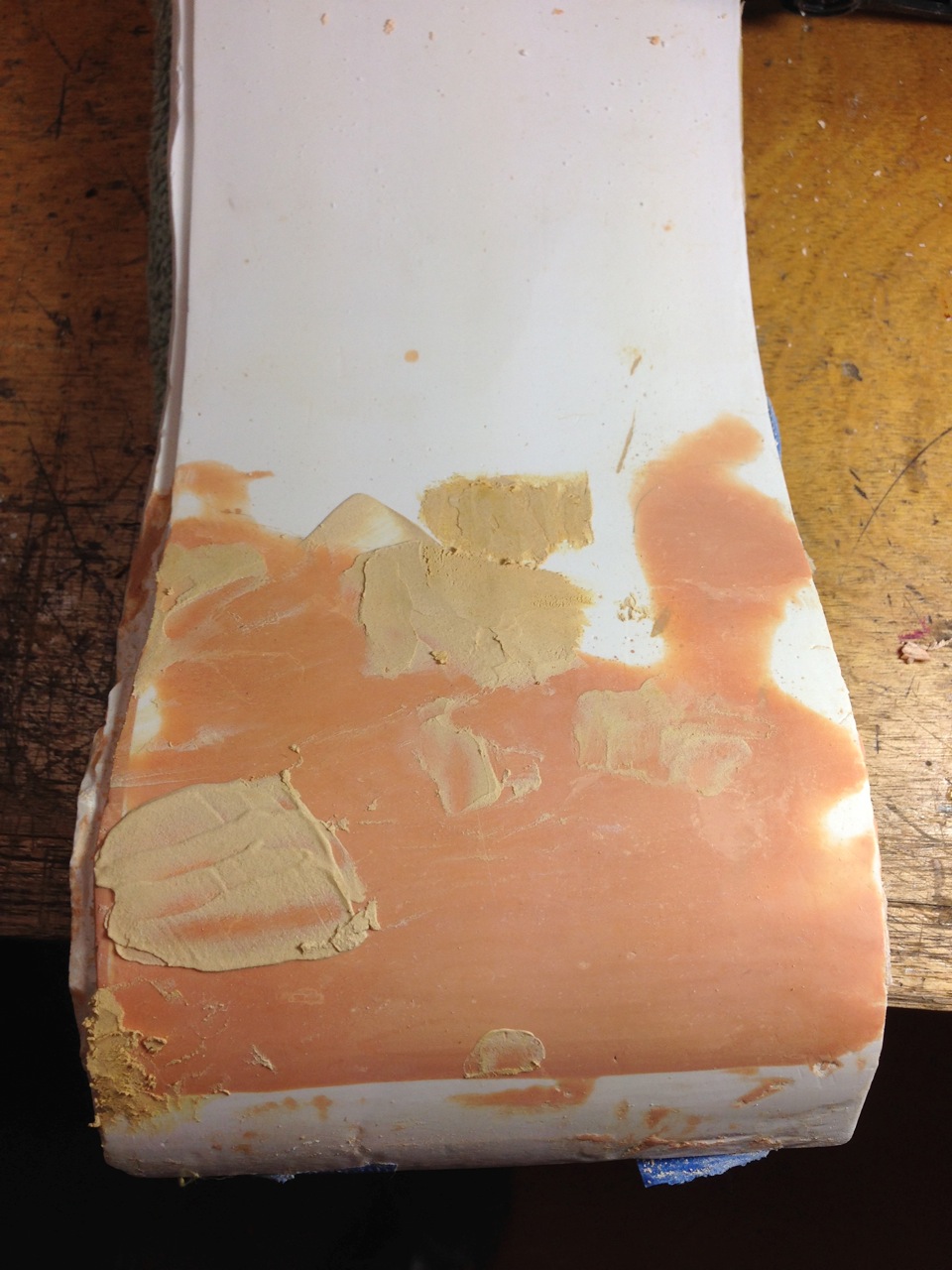 To correct the mold high areas can be scraped down, while low areas must be filled with more plaster. Mix a small batch of the same plaster, wet the mold before applying. Scraping the new plaster while it is still green will endure a smooth transition between old and new layers. Adding a different color to each subsequent layer is a good way to make sure only the new plaster gets reshaped. 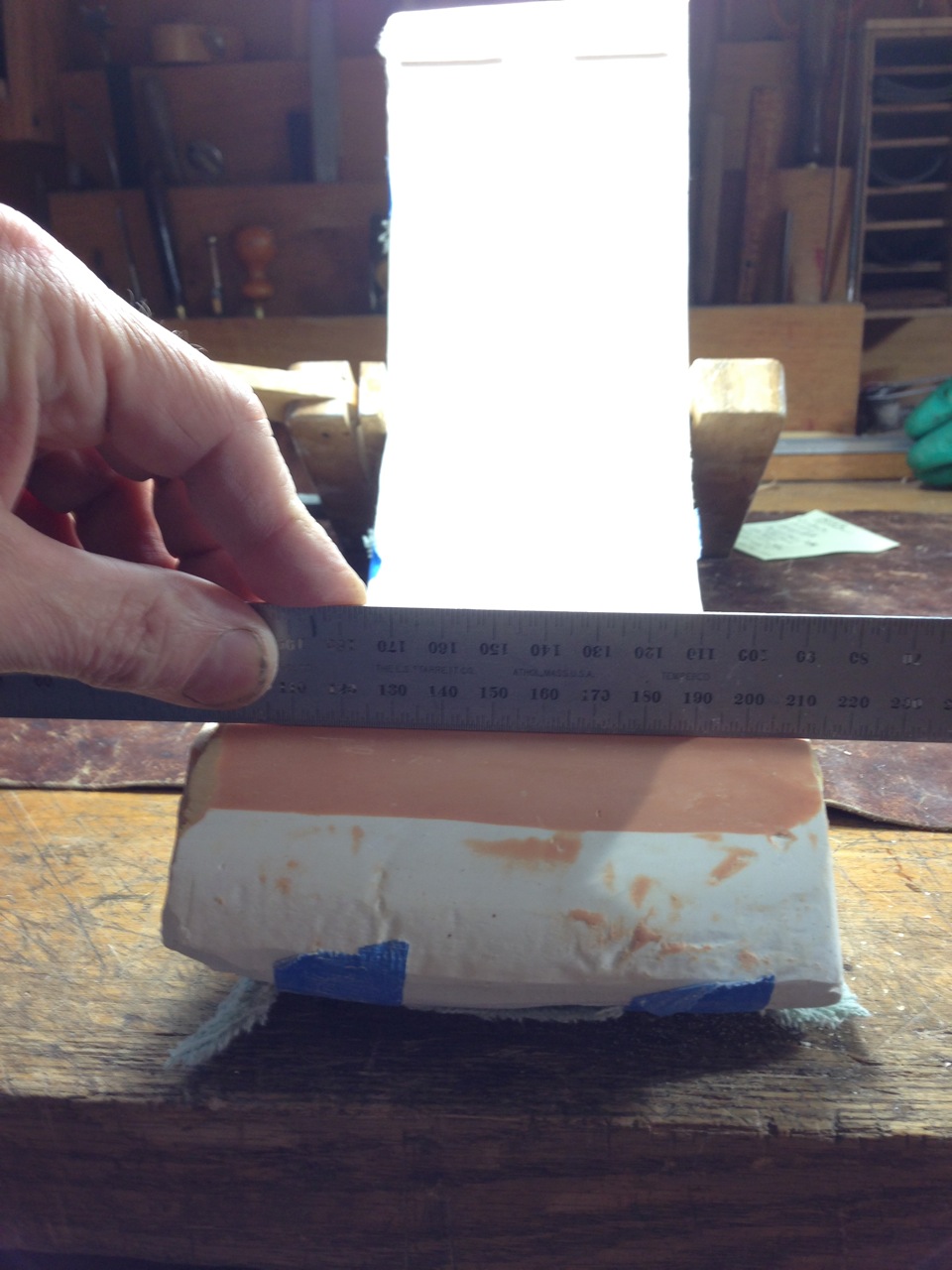 The corrected mold. Other parts of the rib will be left with its natural undulations 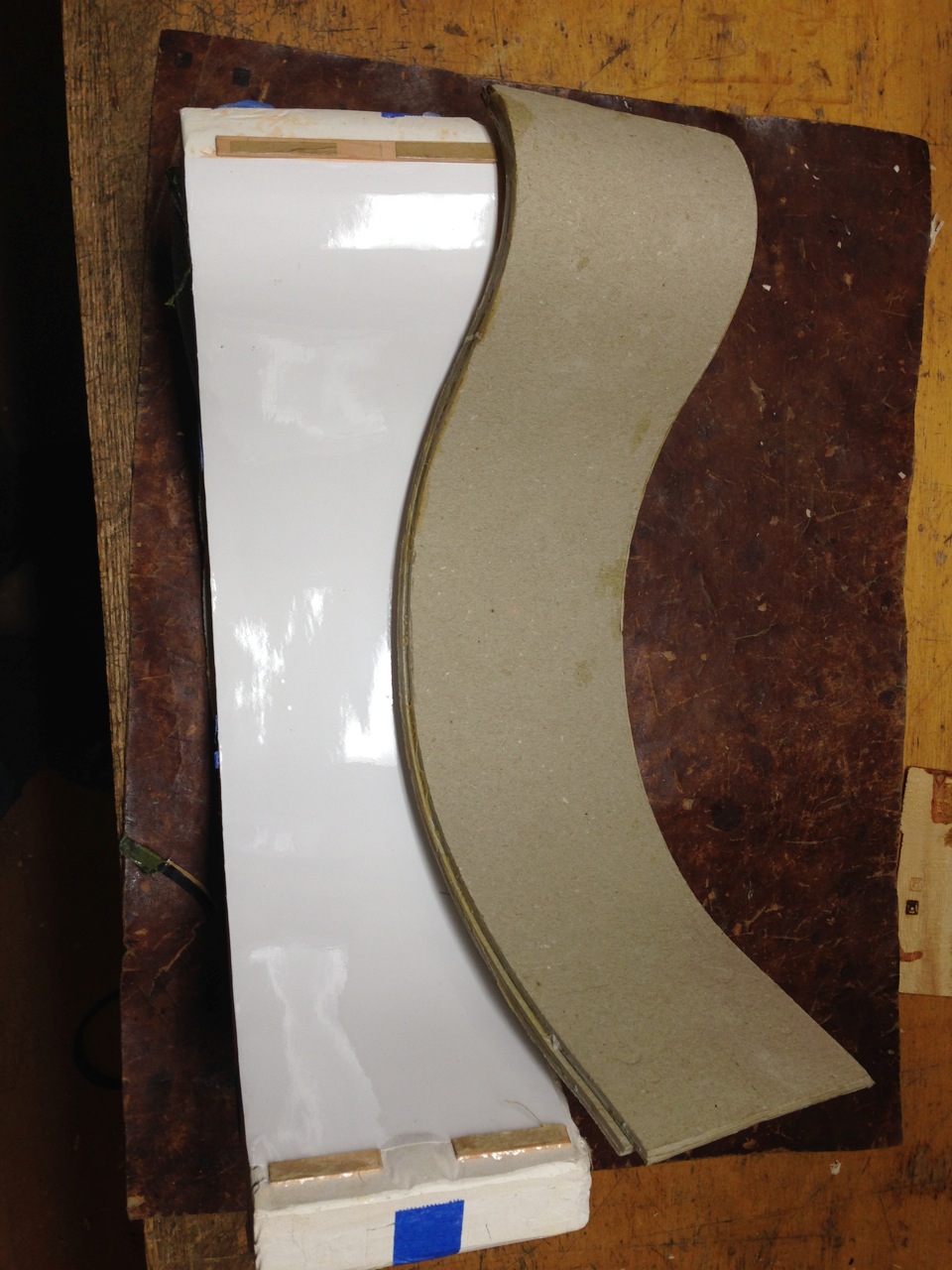 An internal counter form was made by laminating four layers of stiff card (check the grain direction of the card before cutting) glued with Titebond and placed in the vacuum bag with the plaster cast. The resulting counter form is quite stiff, has all the undulations of the rib and is moisture absorbent . It will be used to hold the newly laminated rib for a week or so while it dries. The plaster has been lined with a low-tack adhesive vinyl obtained from a sign printing shop. 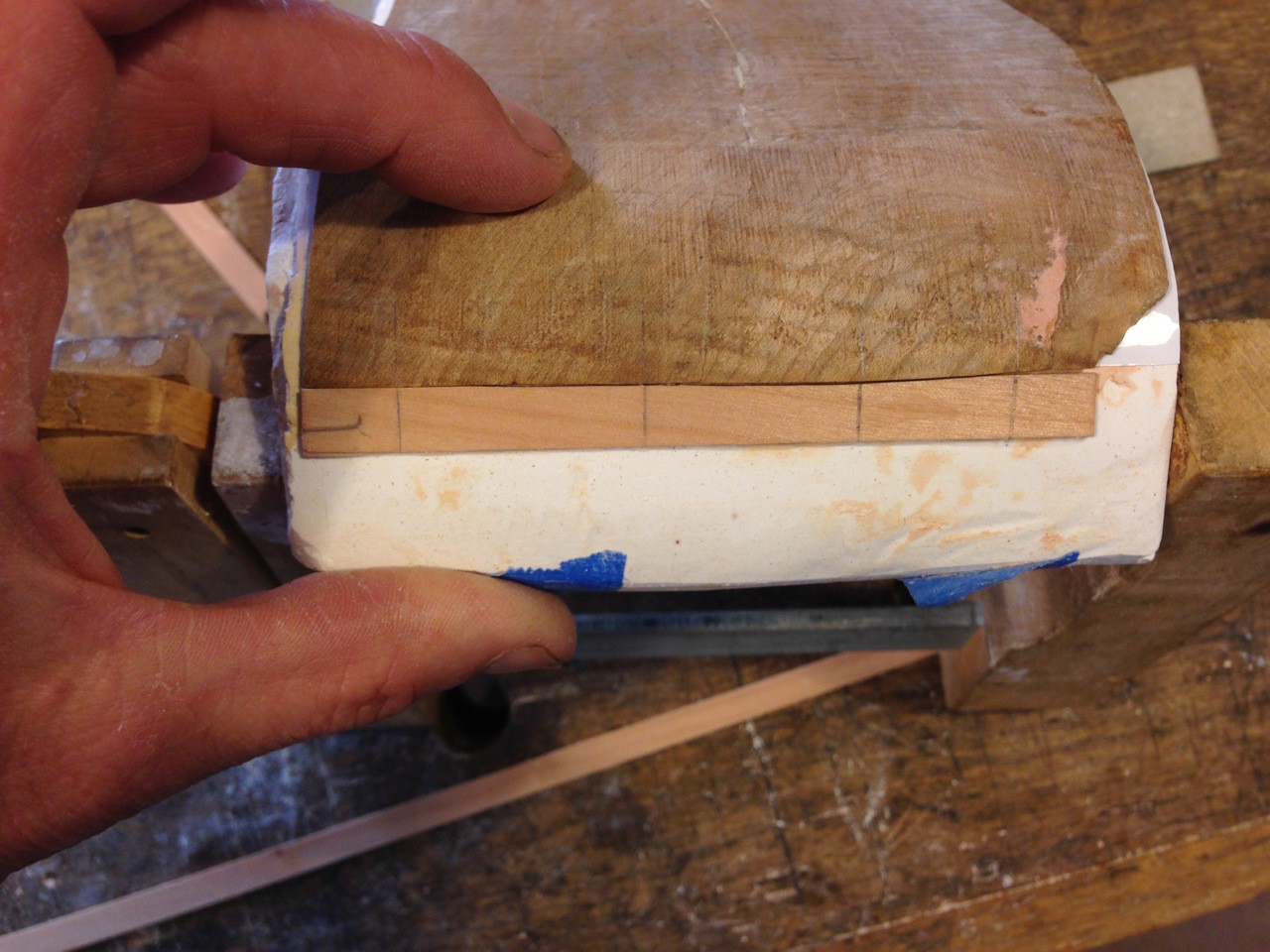 Wooden stops were glued to the plaster and alignment marks pencilled on, these will be visible through the vacuum bag to ensure correct positioning of the rib in the mold. 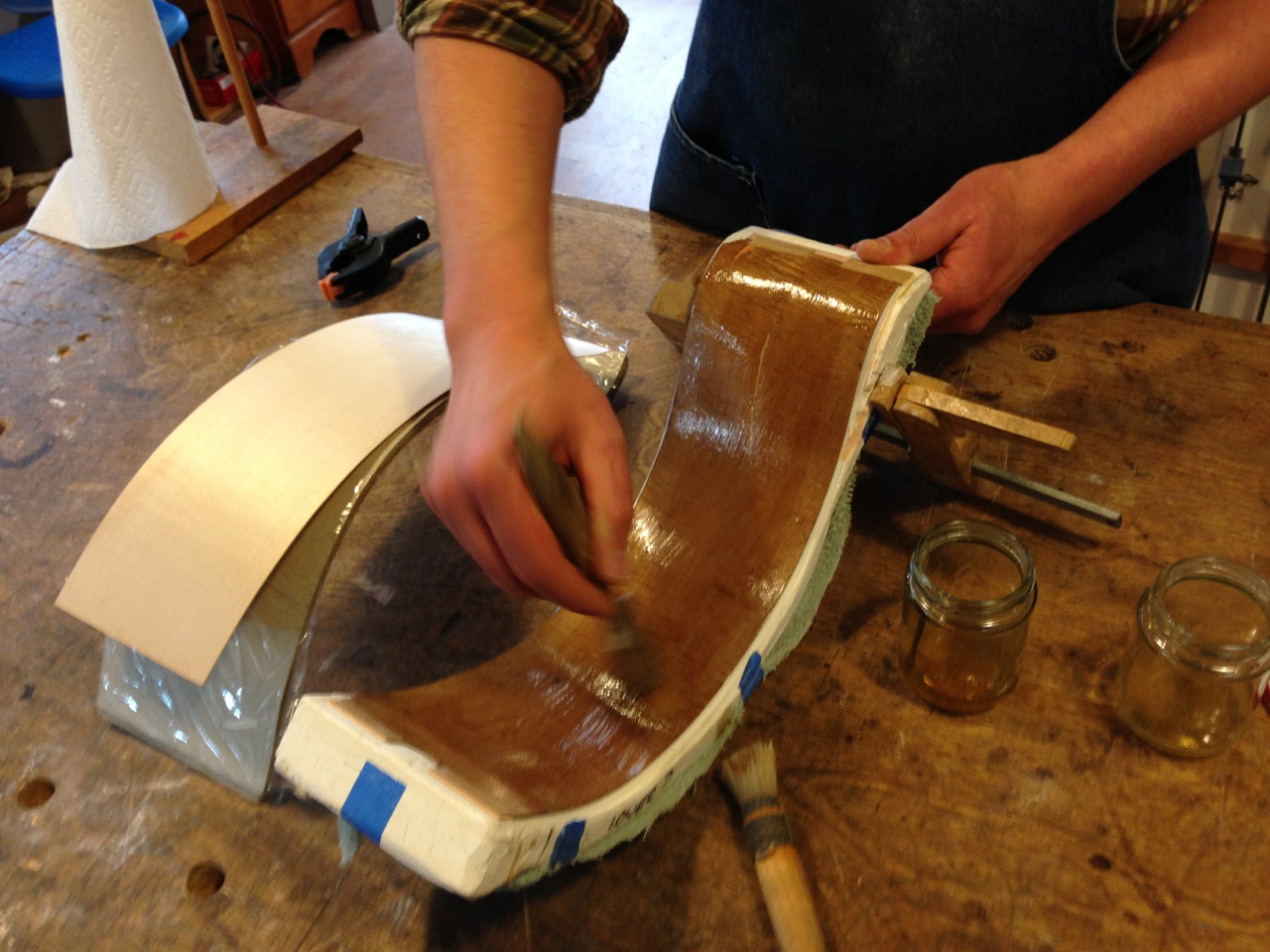 Fish glue is applied to the rib, the new maple laminate and counter form wait at the side….. 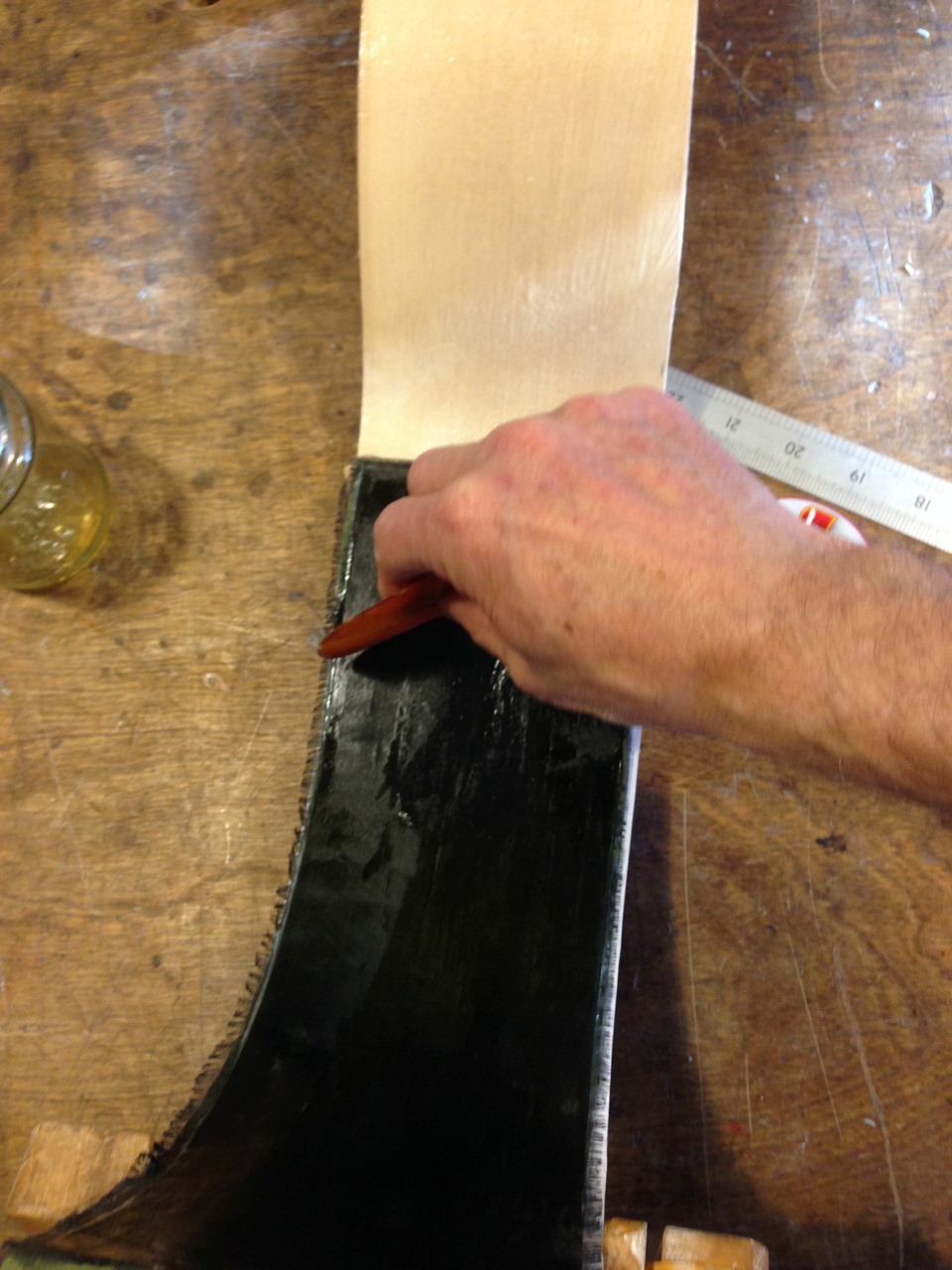 … the silk is located, more glue is applied and the excess squeegeed off. 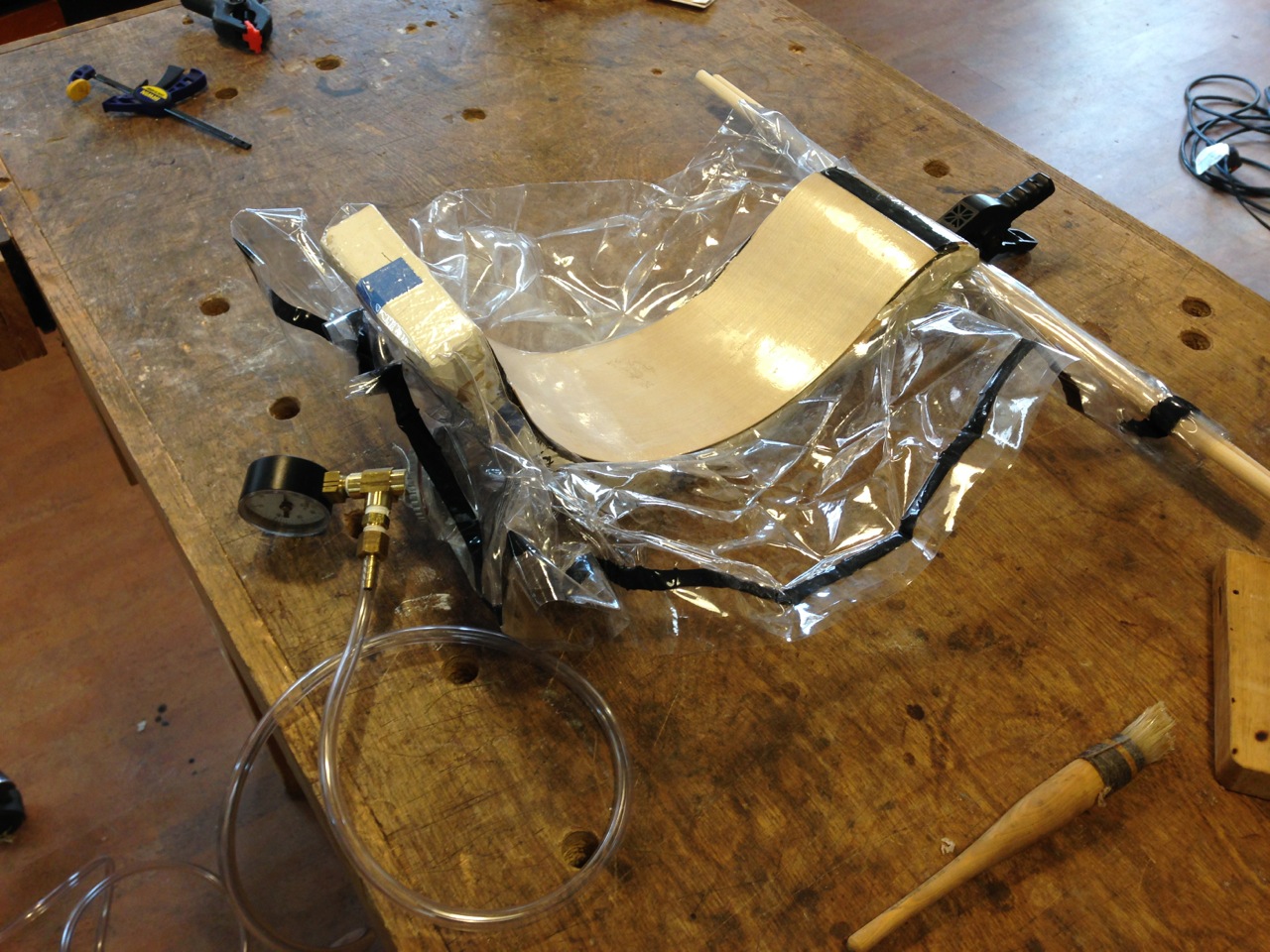 With the doubling located the whole thing goes into the vacuum bag. We left it for two hours, long enough for the layers to be sucked close and for the glue to tack up. Everything was then removed from the vacuum bag and after clamping the cardboard counter-form was clamped into place, it was set aside to dry properly

After the doubled rib is throughly dried the new  maple is thinned down  to give the rib normal dimensions and flexibility. Because we are relying on the silk and not the new maple  to hold the cracks together, there is no need to leave the doubled rib thicker than a new cello rib.

We were working with ribs that had been removed from the cello.  I think that using a plaster mold and card counter form an effective doubling could be made with the rib in place on the back of the instrument.  Final clamping would be done using many traditional clamps rather than the vacuum bag,