Finishing the guitar was pretty much a pain and took way longer than I expected.  At first I was going to use violin varnish which I’m more familiar with, but having gone so far down the “conventional guitar” road,  I felt I should go all the way.  Unlike violins, which can have some texture to the varnish, guitars are typically finished with a high gloss, uniform surface, like a car.  There are two disadvantages to this. First it takes a LOT of work. Second, any little scratch on the new guitar will show up painfully.  One of the nice things about antiquing violins is that the first scratch it gets in the real world can easily be blended in, and the owner need not feel so bad about it.

Finishing rosewood starts with filling the pores in order to get a smooth, level surface. This is usually done with a colored paste but on the test pieces that I made, the flat color of the paste seemed to take some of the warmth and sparkle out of the wood. Also, the colored  filler needed to be handled carefully so as not to stain the light colored bindings.  Instead of colored filler, I ended up applying a couple of coats of clear epoxy and leveling it with a scraper. 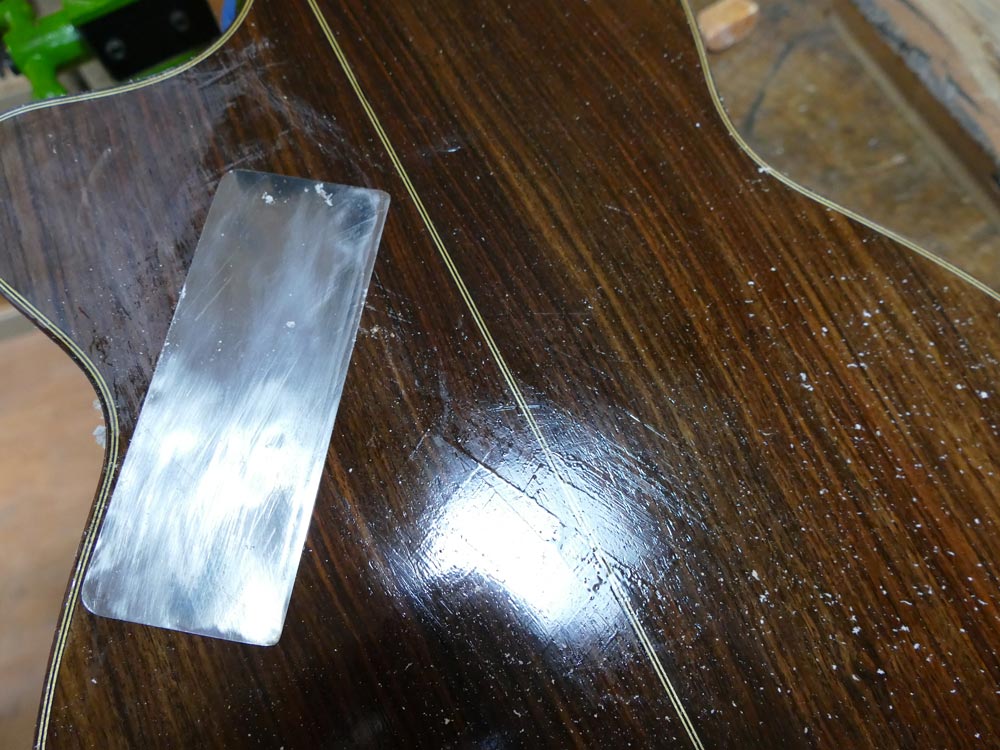 Having achieved a smooth surface  it was just a matter of applying shellac and rubbing down between every few coats.  Once I had a continuous film of shellac, I switched to french polishing for the final finish. I’ve done some french polishing on violins but working such a large area meant that I had to up my game, which I did with the help of YouTube. Its a good skill to have and I used it extensively in my next project, the Rustic Viola. 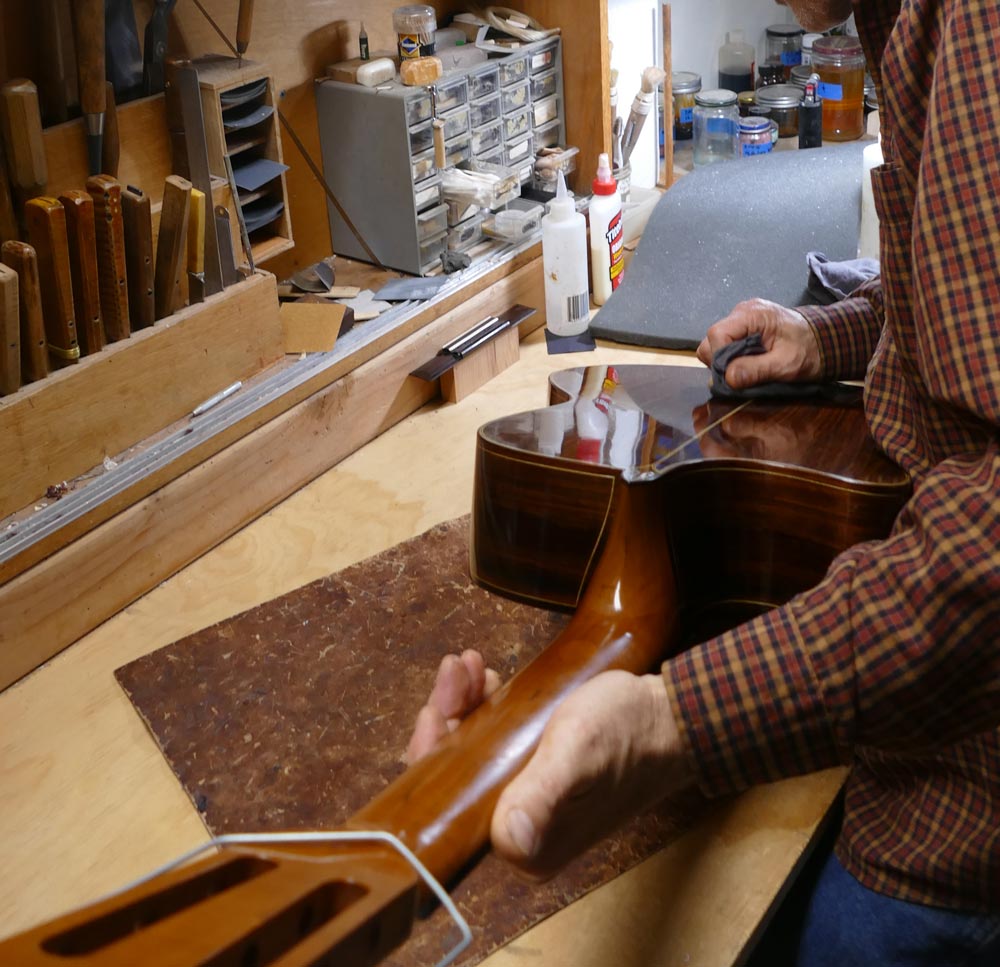 At last the bridge went on, and finally… 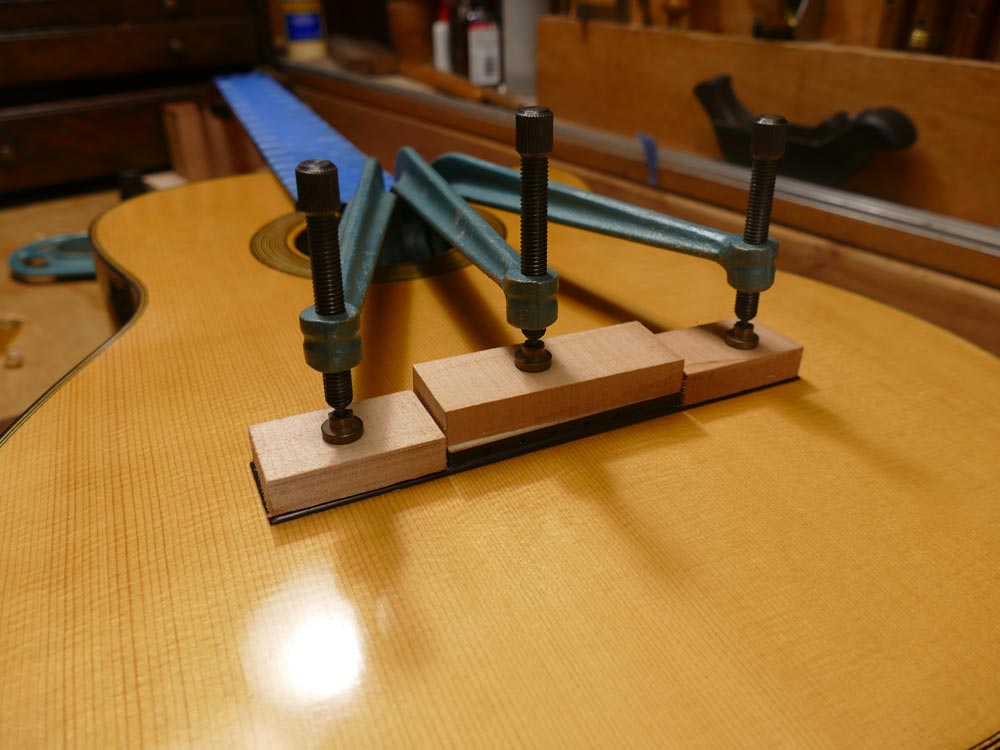 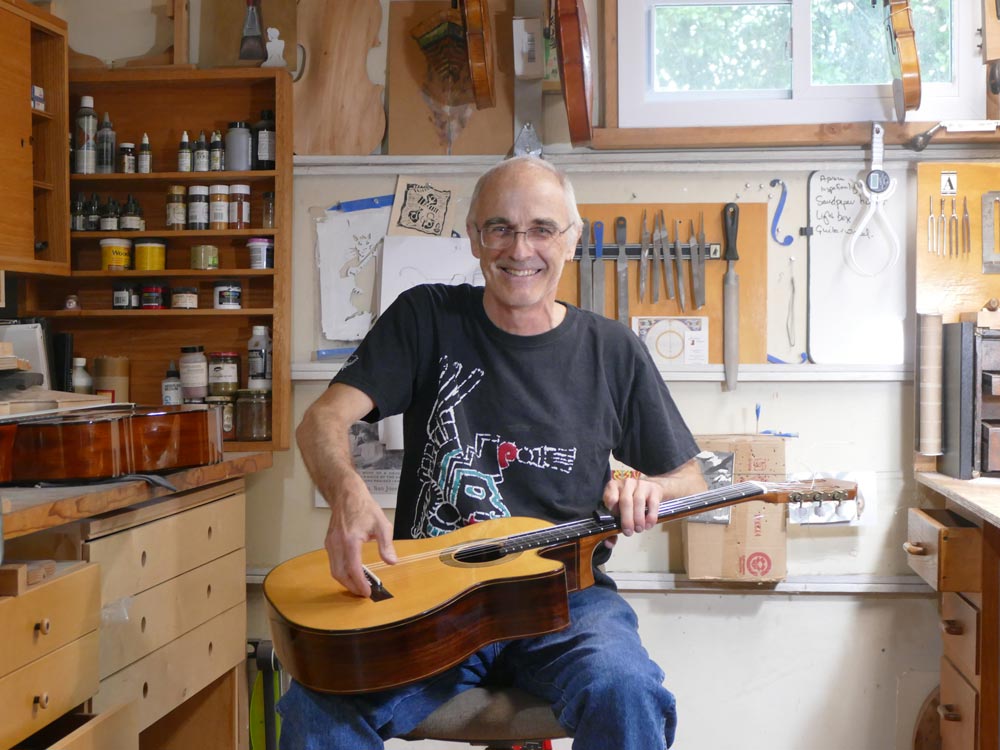 The guitar sounds good, fuller and more robust than the one that I’d been playing on, so I’m very happy with that.  Richard came by with one of his guitars and I realized that I’m not in the professional league yet. His guitar has a much clearer and cleaner mid to high end, plus a lighter response. It seems that, even though I thought I was pushing the limits, I had left the top too thick. I could thin the top down from the outside and refinish it, but I like the guitar well enough the way it is. Since there are a few other things that I would like to try differently…….It seems that I’ll have to make another. Meanwhile, here he is taking my new guitar for a test drive.